Research indicates that Saint Bernard dogs were founded in 980 AD and bred by monks. Most likely this breed is a descendant of the ancient Roman Molussus dogs that arrived in the Swiss Alps some 2000 years ago with early Roman invaders.

Other breeds considered to have played a part in the development of the St. Bernard include the Great Dane and the Newfoundland. 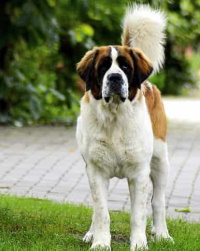 For most people the image of the Saint Bernard that usually comes to mind is that of a benevolent rescue dog, toting a brandy keg around his neck while searching the snowy mountain passes to bring aid to those in distress, lost, or trapped under snow!

And this is a pretty accurate picture except for the brandy part which is just an interesting myth.

However, they were indeed used as rescue dogs by the famed Hospice founded by Archdeacon Bernard de Menton around 1050, located in an alpine pass between Italy and Switzerland.

While it is not clear as to when the St. Bernard dogs were actually brought into service at the hospice, some historical sources believe it was during the latter part of the 16th century.

Doubtless the dogs never actually met Saint Bernard himself, which may explain their rather sad expression! On the other hand, their somber look may be the result of one too many long and cold rescue missions out into the snow!

But, joking aside, this alpine giant of a dog does have more than a few physical characteristics that make him a very suitable breed for search and rescue type work. One of those attributes - a highly developed sense of smell - enables him to locate humans that may be trapped under snow following an avalanche. Another is his acute hearing that can tune into frequencies not heard by people and gives him an awareness of forthcoming avalanches or storms.

Of course Saint Bernard dogs also possesses the strength and stamina that is crucial to rescue work.

Living With A Saint Bernard Dogs

Saint Bernard dogs are generally regarded as being gentle, good-natured, friendly, loyal, intelligent and obedient dogs. But, an owner that wants to end up with a dog that matches these fine characteristics, needs to begin training him very early - especially with the obedience part.

It's not hard to imagine that trying to train an adult Saint would present a lot of challenges, to say the least!

Additionally, puppies need to receive extensive socialization with people in a variety of settings, as well as exposure to other dogs.

St. Bernards are people dogs and really like to spend most of the time with their human pack. This can be quite an advantage when you are house training them to go outside as they'll want to follow you.

While not being an aggressive dog, the sheer size and impressive bark of the Saint Bernard makes him the ideal watchdog.

A potential intruder would likely move on to another house once they catch sight of him!

Physical Stats of the St. Bernard

Without a doubt the physical feature that catches the most attention when it comes to the St. B, is the awesome size of its head. But, while this appears to be the dominant feature, everything else is really in good proportion to it - or should be!

Here are the ideal numbers:

The St. Bernard is a dog of impressive stature and dignified charm. There is something about his demeanor and solid appearance that makes it easy to picture him as a comforting companion and guardian to the hospice monks and reassuring to those he aided in snowy cold terrains.

Saint Bernard dogs have dense coats which may be seen in either a short close-lying type or a longer variety that is a bit wavy. In either case the thighs and the collar areas are more heavily furnished.

Both coats are subject to a significant amount of shedding. Daily brushing will help keep the loose hair from piling up around the home, as well as avoid mat formation and skin infections to which they are prone.

The FURminator Long Hair deShedding Tool is an excellent grooming tool to keep shedding under control and the coat in the best condition.

Aside from coat care, Saint Bernard dogs have the kind of ears that need to be inspected often for routine cleaning, plus nails given a trimming when indicated. Drooling is another matter that just goes hand in hand with the breed. Some say that if they are not overly excited by various activities, they drool less.

Lastly, it's also a good idea to give your dog an overall pet checkup once a week - you can find out how to do that here. 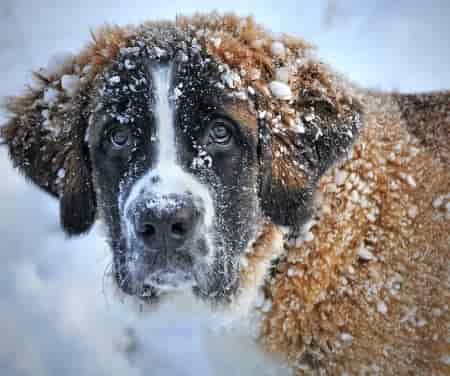 Other diseases that have been associated with Saint Bernard dogs include:

Because of their physical characteristics, they are more prone to encounter bloating. For this reason, they would benefit from their food requirements being split up into smaller meals spread out throughout the day.

Saint Bernard dogs are not a long-lived breed, but with good nutrition and care, the life span can extend to ten years.

How Active is the Saint Bernard?

This breed needs a daily walk to stay physically and mentally fit. He doesn't particularly need long walks, but he'll very happily go hiking on long treks in the mountains with you.

As puppies they should not be exercised too much, but rather, taken on short walks or given brief playing sessions until they are two years old. This is because their bones have not yet fully grown and are subject to injury.

Saint Bernard dogs are going to be appreciative of a more spacious house with a yard to romp about in. If this house happens to be in a cooler climate, so much the better as far as their comfort is concerned.

Air conditioning would make a warmer climate more tolerable for the breed, along with a shady yard.

A well trained St. Bernard bred by a responsible breeder, will generally be very good with children.

However, this breed was subject to some opportunistic breeding at one time, resulting in some unpredictability with regard to temperament. So if you want to acquire one as a family dog, choose your breeder wisely, or adopt an older dog whose temperament is already known as reliable.

One other thing to consider if you have small children is the breed's very large size and weight. While a Saint from good stock is generally going to be gentle around children, you can't rule out the possibility of accidents during play.

Bottom line: Whenever a Saint Bernard interacts with children, please make sure an adult is keeping an eye on their activities.

Saint Bernard dogs have proven to be very good companions, but they do need regular exercise, considerable grooming and someone that can handle their size.

For these reasons, they would not likely be the first choice for an senior or less active family.

If you're a proud owner, breeder or fancier of this breed, we'd like to hear from you.

There's nothing like first hand information to help someone who is considering a particular breed for their family and your knowledge can be enormously helpful.

Please share your insider information and experiences of living with and loving this calm yet awesome dog breed. You can tell your story here 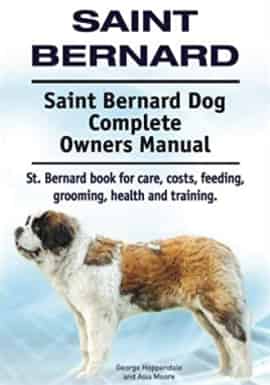