Pug Dog Breed
A Guide To The Popular Toy Pugs

When it comes to the origins of the Pug dog breed, most of the available information is mainly based on speculation.

That being said, the majority of historians will agree that toy Pugs are a very old breed, generally believed to have originated in China, some time prior to 400 BC.

During this period the Pugs are said to have enjoyed a high status as companion pets in the palaces of Emperors. There seems to also be a consensus among experts that they were revered pets in the Tibetan monasteries. 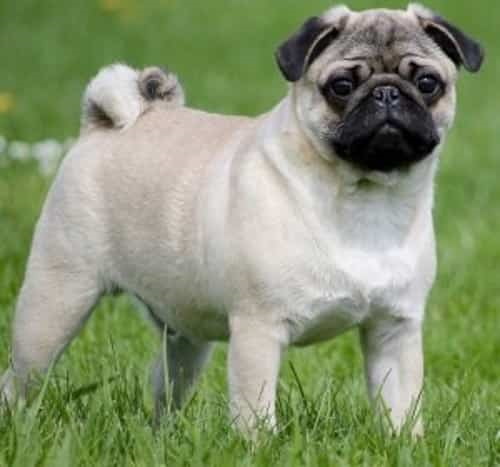 Later history reveals that the Pug gained much popularity in Europe where this small dog breed was often to be found in royal households - although it was also treasured by people from all walks of life. They were especially favored by the Dutch who, it is said, trusted them to watch over their children.

One Pug is credited with saving the life of Prince William of Orange by alerting him to the advancing Spaniards in 1572 at Hermingny. Much later, when William III became king of England, the favored Pugs crossed the channel with him, beginning their popularity in Great Britain.

During the 19th century, the British brought several more of these dogs back to England after they had successfully taken over the Chinese Imperial Palace. Subsequently, the Duke and Duchess of Windsor became very fond of the breed and owned twelve of them during the course of their lifetime.

Among the popular small dog breeds, the Pug has been described by owners as charming, yet strong-willed. Their charm has led them to become somewhat famous in the movie industry.

The Pug dog breed is a small version of the mastiff, which makes him look quite robust for his small size. His overall appearance is that of a charming, chubby, and squarely built dog.

The coat is smooth and soft, but one surprising feature of the Pug that you should really take to heart, is that they are known to be notorious shedders.

Owners need to brush them quite a bit - daily even, and vacuum up the fur balls often. One grooming tool that is a life-saver and that pet owners swear by is the FurMinator.  It handles shedding like no other tool and keeps the Pug's coat under control for a longer period of time.

Other important grooming areas are:

With such a short face doing all the sniffing around that dog's do, a lot of undesirable junk and slobber gets into those folds around the muzzle and above the eyes. But if you keep a supply of natural grooming wipes at hand, it's easy to clean the facial area quickly and avoid bacterial issues.

Pugs are prone to ear problems such as infections and mite invasions. As such, regular cleaning with an ear wash is important.

Many dogs are not very cooperative when it comes to nail clipping - Pugs are even more so, plus their nails grow quickly. Rising to this challenge, some owners have found it very helpful to use an Elizabethan collar for the job because it makes the dog much calmer.

Another less traumatic approach for the dog, and you, is a dremel nail filer especially for dogs with black nails that make it harder to see the quick. 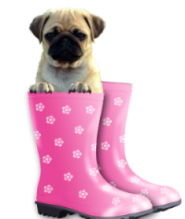 One of the most debatable and frequently asked questions about the pug dog breed is: Do Pug's snore? In regard to this, most owners report that the little cuties "do" indeed snore, so if this bothers you - wrong dog!

The Pug's character is best described as playful, charming, clownish and somewhat "naughty". They are quite intelligent, love to be around people and are very affectionate.

They do seem to enjoy the attention of being dressed up and in general their owners seem to like decking them out in fancy coats and sweaters.

While the Pug temperament is often described as stubborn, they are never aggressive or pugnacious! However, the stubborn streak can make potty training your dog harder.

Among the small breeds, the Pug dog breed is one of the most popular companion dogs and considered to be easy to obedience train once you take the lead.

Another useful trait around the household, is their reputation for being a fairly good watchdog. To clarify "fairly good", they will bark to alert you of a possible intruder, while at the same time not being nuisance barkers.

How Active Are Pugs?

These little dogs do not need a lot of exercise - in fact, care should be taken not to over exercise them in warm weather because they really cannot tolerate a lot of heat.

Some pugs are prone to breathing problems related to the brachycephalic syndrome.

However, under normal conditions, the Pug dog breed is pretty tough and short walks will be enjoyed - not to mention it will help keep their weight in check!

Ideal Space For A Pug

This breed can adapt to city or suburban life, house or apartment and a yard is not a necessity.

Aside from their love of play, they are not especially active dogs around the house. That being said, a daily walk is good for social and mental stability.

Are Pugs Good With Children?

The Pug has a very good reputation with children, being very loving and patient.  It goes without saying that children should be taught how to interact with pets and respect their small size in this case.

That being said, any dog can be unpredictable and it is always recommended that activities between pets and children be supervised by an adult.

Almost a match made in Heaven! This breed makes an excellent companion for seniors or a more sedentary family.

Exercise demands are modest and he seems to be extra sensitive toward the more needy.

What Can You Share About The Pug Dog Breed?

Is The Pug Your Favorite Dog Breed?

Do you have a beloved Pug dog? Have you had one in the past? Or do you just love the breed?

Please take a minute to tell our visitors why you love the Pug and even how you enjoy spoiling them! Go here to tell what you know about this fascinating little dog and get your own Pug page!

NOTE: This page may contain links. If you make a purchase through a link, I may receive a small
commission at no extra cost to you.
Home | Site Map | Contact Us | Privacy Statement | Advertising/Disclaimer