Ear infection in dogs can be identified by a number of noticeable symptoms. These symptoms, left untreated, can cause a high degree of discomfort, pain and stress for your dog.

While an infection may start out with a fairly low level of discomfort - such as the presence of a foreign object in the ear, it can quickly escalate to a much more painful and serious inflammation.

You may want to bookmark this page for quick reference in the event that you should suspect an ear problem in your dog. Here are some notable signs and symptoms of ear infection in dogs: 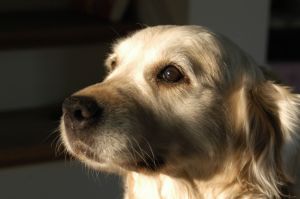 Ear Infection In Dogs Symptoms That Are More Severe

Also, if the nerves of the inner ear are involved, your dog may begin to show telltale symptoms of an unusual set of eye movements, known as nystagmus.

Keep in mind that the ears of your dog play a big part in his ability to balance.

If you notice your dog walking in a strange way and seems to be falling down or tripping upon himself quite frequently, there may be an injury to his ears that is involved, or an infection.

Immediate veterinarian attention is highly recommended at this point.

There are generally different severities of dog ear infection symptoms. However, it is not wise to go poking about in your dog's ear trying to treat the problem yourself. A dog's hearing is too precious to take chances.

Aside from routine ear maintenance, when you suspect an ear infection, it is always in the best interest of your dog to pay a prompt visit to the vet, not only to identify the problem but also to alleviate the pain.

A dog that has an infection in his ears will generally be very uncomfortable, and even display symptoms of depression.

He or she may even have a decrease in appetite and general malaise. There may be a lack of energy combined with a more frequent desire to sleep.

If your dog's ear infection is caused by ear mites, there will be the existence of a black discharge, head shaking and scratching.

Infections of ear mites occur most often in puppies. When ear mites are the culprit, the symptoms usually involve both ears and even other parts of the body.

Fever...
Sometimes a high fever with temperatures above 102°F is symptomatic of ear infection in dogs, as can be hair loss, lethargy and weight loss due to a lack of appetite emanating from the problem.

It's clear to see that the symptoms of ear infection in dogs are no joke for the affected pet!

Caring owners not only want to help their pets avoid them, but also to end the pain and suffering as quickly as possible should they have one.

Establishing a routine of regular inspection and cleaning is a good foundation to help in avoiding ear infections.