So you've heard a bit about clicker dog training and you're here to find out more. That's great news for your dog because it's been shown that dogs love this method of in-home dog training.

It's also good news for you because owners who choose clicker training for dogs enjoy using a system that is not only gentle and uncomplicated, but gets their dog's attention quickly without using any form of harshness! And that makes it fun too!

So What Is Clicker Dog Training?

Basically, this type of dog training is based on the reward concept, i.e. show me a certain behavior and receive a reward. By using this approach you will be able to direct your dog's behavior in a positive way, plus steer him away from undesirable behavior.

You will also be using a system that connects with your dog on a level that he will not only understand, but that will leave a lasting imprint on his brain. If that sounds a bit hocus pocus to you, don't worry, it's not.

In fact, the clicker dog training system is grounded in the study of operant conditioning - a term which simply means learning through consequences. The consequence being a reward or the absence of a reward.

The major research concerning operant conditioning is credited to noted psychologist B.F. Skinner and his studies of behaviorism.

Following up on Skinner's research, two of his former students put this knowledge to work, successfully applying its principles to the training of dogs and other animals, and later into marine mammals.

Subsequently, other trainers followed suit, most notably Karen Pryor, who is widely known for her clicker training with dogs. 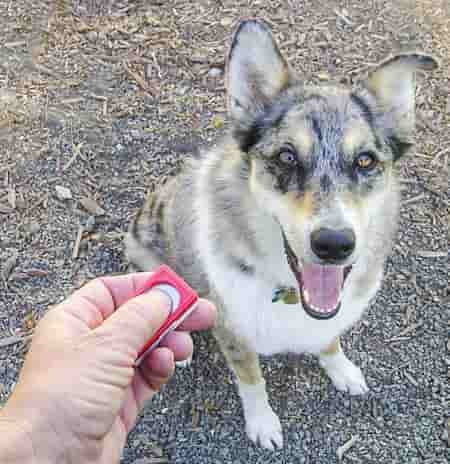 How Does Clicker Training Work?

Simply put, clicker dog training works on the principle of marking desired behavior with a clicker device. A dog performs a behavior such as "sit" and hears a click to "mark" it followed by a treat as a reinforcer. After several repetitions of sit, click, treat, a verbal command can be introduced to cue the desired behavior.

By and by, when this routine is applied consistently, you will have a dog that sits on just the verbal cue. The advantage of using a clicker when starting to train your dog is that it is quicker than the human voice in marking the behavior and this makes it clearer to the dog exactly what behavior got the click and subsequent treat.

The dog also learns that it is fun to figure out what he needs to do to get the reward! And it is so much better to train in a positive way in which your dog is eager to participate rather than in a no-fun negative way in which the focus is on his mistakes - don't you agree? Plus a negative approach does nothing to build his confidence.

Seen from the dog's point of view, it's pretty clear that he would respond much faster to training when getting a treat than a scolding!

Punishment based training may work, but it will never see the light of day on this website.

While you've probably heard a lot of convincing talk about clicker dog training, you wouldn't mind a tad more reassurance before moving ahead with it... and that's okay.

Well what I can tell you that was persuasive to me, is the fact that it has been used to successfully train many hundreds of dogs to work as service dogs, as well as for Search and Rescue - occupations that rely heavily on consistent performance.

Not only that, clickers or similar marking devices, have been used to train a wide variety of other animals including, birds, dolphins, whales, even goldfish!

Watch this video using clicker training with a puppy, for even more proof that dogs enjoy and respond to this type of training.

But don't just take the word of thousands of trainers, go try it and see for yourself. I think you'll very quickly become an advocate of the method. Not only that, you'll welcome the stronger bond with your dog that develops as a priceless side effect of this gentle approach to dog training.

From my own experience with dogs, I know that they are not doing something naughty all the time. Frequently, you have a chance to catch your dog in the act of doing something you want to encourage. This is the time to "click-it".


One thing you will notice about clicker dog training is that your dog enjoys using his brain to interact with you his pack leader. It is also gratifying to see the rapid progress that can be made from using a positive approach without any need for harshness.

One of the most respected authorities on clicker dog training is Karen Pryor. If you want to get some good information, including videos for starting out with this method, I can highly recommend her website.