Sad as it may be, chocolate poisoning in dogs is a fairly common condition prompting frantic phone calls by pet parents... "Yikes, my dog ate chocolate, what shall we do?, is it serious? etc."  Well you get the picture. 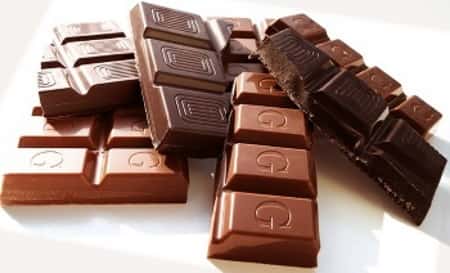 You may already know that chocolate is dangerous to dogs. But, still you'd like to know: is it really that harmful?

Well the simple answer is yes, which is a good enough reason to always keep it out of your dog's reach. And, be especially diligent on those more chocolaty occasions such as birthdays, Valentine's Day, Halloween, Christmas, etc.

Actually, it's a well-know fact that dogs can crave chocolate as much as humans, once they get to sample it.

And while its a food that's irresistible to most people, it has to be kept away from your pet because chocolate poisoning in dogs is very serious and can have tragic results.

Add to that another fact that dogs seem to have an uncanny ability to find and eat things that can lead to digestive problems for them!

So, in addition to safely hiding your sweet treats, don't overlook the chocolate chip cookies or chocolate cake you just baked! Anyone familiar with counter surfing?

Why Chocolate Is A Toxic Treat

The downside of dogs eating chocolate, is that it contains caffeine plus a substance called Theobromine.

These substances are known to stimulate the heart and central nervous system plus have a diuretic effect.

Whereas, humans can metabolize both of these ingredients in a couple of hours, it is quite a different story for dogs. A dog's liver has to work long and hard to clear these chemicals from its system. This can take up to eighteen hours!

There's no two ways about it, chocolate is a sweet but dangerous substance for pets. So, if your dog ate some chocolate, very prompt veterinary treatment is needed to stabilize your pet from the effects of the toxic substances.

The Symptoms of Chocolate Poisoning in Dogs

Depending on the amount a pet has ingested, the symptoms can range from very severe to mild even though they may not show up right away..

Here are some of the first indicators to look for if your dog has eaten chocolate:

More severe symptoms that appear later can include:

While it's not a pretty picture it's better to forewarned so you can be forearmed.

What You Should Do After The Chocolate Caper

The best thing you can do when you suspect your dog has consumed chocolate, is to immediately call, or go directly to your vet.

Your vet will most likely want to induce vomiting if your dog hasn't already brought up the contents of his stomach.

Can A Dog Die From Chocolate Poisoning?

The answer depends on a few things.

What happens after a dog ingests chocolate greatly depends on:

The most toxic chocolate of all to dogs is in the form of cocoa powder.

Among the bars of hard chocolate, the very dark kind used for baking is the most dangerous.

How Much Is Too Much Chocolate For Dogs?

Just to give you an idea...according to the National Animal Poison Control Center at the University of Illinois:

A 1.6 ounce bar of milk chocolate eaten by a 10-lb dog could cause bad reactions. But, if the 10-lb dog ate the same amount of unsweetened baker's chocolate, it could result in death.

If your dog has eaten some chocolate go to this handy chocolate toxicity calculator which will give you some more information.

You just need to know the type and approximate amount eaten. You can find it here at Merck Vet Manual.

The link to the calculator is halfway down the page on the right, and is entitled: Clinical Calculator: Chocolate Toxicity Calculator.

Since the evidence shows that this very popular human treat can cause chocolate poisoning in dogs, it's definitely something to keep way out of Rover's reach.

However, if you'd still like your dog to have a chocolate-tasting treat, there is an alternative.

Even though Rover can't eat the chocolate made for human consumption, some manufacturers have created chocolate treats that are safe alternatives for dogs.

Maybe your family dog won't notice the difference because it smells similar too!

So if you plan to satisfy your dog's taste for chocolate, my recommendation would be to look for the dog treats made with carob which has a very similar taste, but is considered a safe alternative to chocolate. 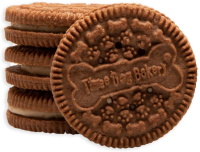 While chocolate poisoning in dogs rates on the high side of concerns pet parents need to be on the alert for, it's not the only thing.

Since pets can get into all sorts of things around the house, both edible and inedible, keep these hotline numbers handy for when your pet has a digestive problem and your vet is unavailable and you need advice: