Brussels Griffon dogs, also known as the Belgian Griffon or Petit Brabançon, are one of the toy dog breeds to consider if you enjoy close and loving pet companions and your lifestyle is such they won't be left alone too often!

This is an old dog breed, and a very intelligent one, from around the 15th century. There are no specific details of its ancestry, though the list of breeds that probably played a part in its development is quite broad. 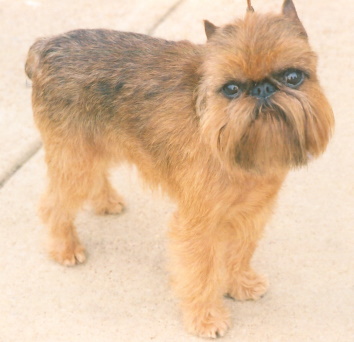 Among the most likely candidates are the German Affenpinscher, Belgian Griffon, Pug, Yorkshire Terrier, King Charles Spaniel and Pekingese. Certainly some of the physical attributes of these dogs can be seen in the Griffon as he is recognized today.

These small dogs are squarely built and of a solid appearance. Originally they had a more terrier-like appearance than they do today. Many describe their expression as humorous and often refer them as having a face that is reminiscent of a monkey. Actually I think it is very charming, with a hint of cheekyness!

Famous owners of the breed include Queen Astrid of Belgium who was such an ardent admirer of Brussels Griffon dogs that she started a kennel to develop her own line. 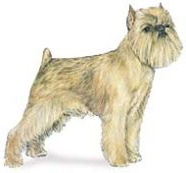 These small dogs have wiry coarse coats, although there is also a smooth-coated variety. The smooth, aka "brabancon" type, is easy to maintain by weekly brushing though it does have a heavier seasonal shedding twice a year which lasts about two weeks.

The rough variety should be hand stripped to maintain its wiry look. Although owners can learn this technique, it is a bit tricky and they may wish to use the services of a professional groomer.

Clipping is also an option for Brussels Griffon dogs that are not being shown, but the coat may take on a different texture. Everyday shedding is generally on the light side. 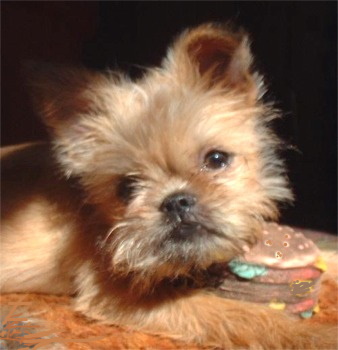 The most common problems that have been noted for Brussels Griffon dogs, include conditions relating to the eyes and nose due to the facial configuration.

This breed has a flat short muzzle, somewhat resembling the Pug, with prominent eyes and a small nose. Similar to other flat and narrow-nosed dogs, the BG can run into breathing difficulties especially on hot sunny days making heat stroke a serious threat.

The BG also has very exposed eye surfaces, making it vulnerable to irritations from airborne substances or scratches from protruding branches and plant foliage while out on walks. Lacerations to the eyes can be very damaging and should be treated promptly. Other noted eye disorders that may affect this breed include cataracts and glaucoma, but these are fairly common conditions with most dogs as they age.

Very lively and affectionate. A good little companion that is cheerful, confident, really likes attention and is somewhat self-important.

Although temperament can vary, some of these dogs can be a bit shy around strangers, cautious in new situations or easily startled. While they are not considered timid, it's a good idea to properly socialize your dog while young to accustom him to a variety of everyday events, loud noises and other pets.

This little dog can be a bit stubborn and independent, so you'll need to be more consistent and patient in regard to training, but he does need to see that you are a firm yet kindly leader.

How Active Are Brussels Griffon Dogs?

You won't need to exercise this dog very much since his 'generally busy' activity level - a carry over trait from his former "ratting" days, remains high, although he does enjoy a good romp out in the open.

A daily walk is always recommended for the fresh air and for the mental and physical health benefits to both dog and master!

As you've no doubt concluded, the very small size of the Brussels Griffon makes it an ideal pet for small living quarters such as apartments or condos - even travel trailers.

Of course if you have several pets, then he would probably like to have his own space - even his own room!

Brussels Griffon dogs are very sensitive and delicate, but they are also strong-willed. If mishandled, during play for example, they will defend themselves - well you can't blame them can you?

With that thought in mind, putting them together with young children is probably not the best combination to avoid any injuries to either one!

BGs are not lap dogs and tend to attach to one person - their pack leader or master. Families with pet-loving older children would be a better match.

They also will sound the alarm if they hear anything unfamiliar or see any strangers approaching.

Home › Miniature Breeds › Brussels Griffon
NOTE: This page may contain links. If you make a purchase through a link, I may receive a small commission at no extra cost to you.
Home | Site Map | Contact Us | Privacy Statement | Advertising/Disclaimer