Toy Manchester Terriers, named after a city in the north of England, are among the oldest of terriers and ones that are both intelligent as well as very engaging little dogs!

This breed is a sleekly built small dog with definite terrier traits whose history dates back prior to the sixteenth century. 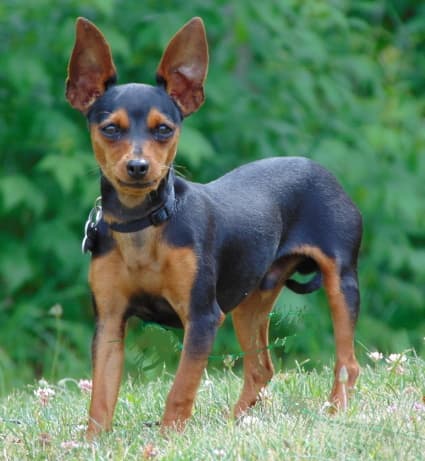 The Manchester was originally known as the Black And Tan Terrier, but at some point during the 19th century, the breed's development was influenced by crossings with the Whippet and the Greyhound. Evidence of these physical characteristics is recognizable in the breed today.

Originally these little dogs were used in the north of England for their skill in controlling the rat population in the industrial areas. One of the most accomplished Toy Manchesters at this job was "Tiny" who, in 1848 killed 300 rats in less than an hour, or so it is said!

Whether fact of fiction, it was a popular pastime to bet on the results of an organized rat-baiting event.

The Toy variety of the breed became popular during the reign of Queen Victoria. It was recognized by the AKC in 1886. 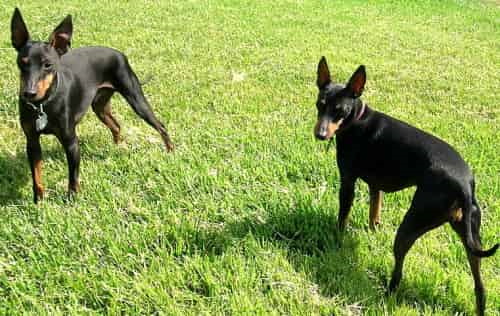 These dogs are very agile and fast on their feet. They can be outstanding in activities like agility and their high intelligence makes them a natural for excelling in obedience trials.

Manchester Terriers are very alert, confident, and protective. As such, they make good watchdogs.

Manchester Terriers enjoy pleasing their master and are intelligent quick learners which makes training them easy and pleasurable.

As a companion dog, they are sensitive to their owners, as well as very loyal and devoted. They can be one-person dogs, but this can usually be overcome if they are well-socialized with other people, pets and situations from an early age.

However, given a choice, they do prefer to be the only dog in the household.

The appearance of this small dog breed is one of fine structure and good balance. He has upright pointed ears and a well-defined rich coloration of black and tan.

In England the ears are left natural and folded over. The standard and toy Manchester Terriers are identical except for their size and ear shape.

The Toy Manchester Terrier has a coat that is short, smooth, sleek and glossy and lies close to its body. The breed has a natural cleanliness and is free of odor.

Shedding is very light in the toy variety and maintenance of the coat is easily handled with a small amount of daily brushing or a rub down with a chamois or grooming glove.

Attention should also be given to clipping of nails which tend to grow quickly in this breed, inspection of ears and cleaning of them when necessary. 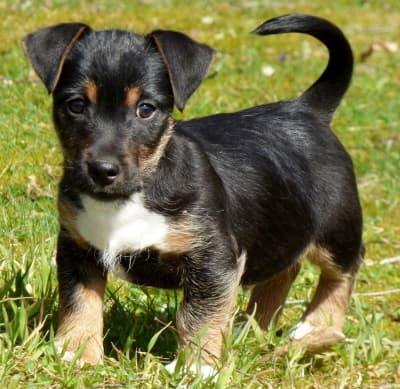 With good nutrition and care, the Toy Manchester Terriers have a life expectancy of up to 16 years, but there are some health issues to be aware of that may affect the breed.


Your veterinarian may recommend health tests for some of these conditions.

Owners, especially first time owners, will find this comprehensive guide to the breed, a helpful reference to have on hand.

How Active are Toy Manchester Terriers?

These little dogs are quite active. They enjoys and should be given a good amount of outdoor exercise.

The Manchester also has a lot of endurance and believe it or not can become your jogging partner if you are so inclined! Just make sure he is gradually introduced to this more fast-paced type of activity and he will do just fine.

The Toy Manchester doesn't have much body mass and can benefit from wearing a dog coat when taken out walking on cooler days. 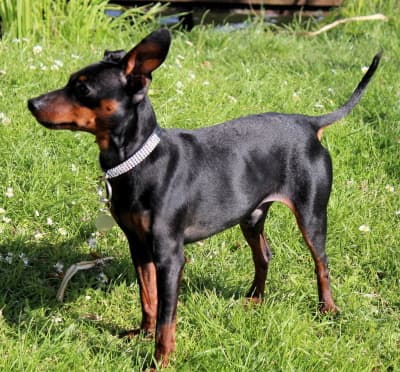 The TMT is not fussy about space and can easily adapt to apartment living as long as they can run around a bit and get out for regular walks.

However, they have a high prey drive and outdoor play areas should be securely fenced.

With their thin coat and small body mass, they do better in warmer climates.

Does the TMT Get Along With Children?

Toy Manchester Terriers are very attracted to children and make excellent companions for them.

However, families with older children who are sensitive and kind with pets that are small and rather fragile, as this one is, would be a better match.

With dogs of any size or breed, we recommend that whenever children play with pets there is always an adult around to supervise their activities.

As A Companion For Seniors?

As long as exercise needs can be arranged, any family will enjoy this lively small dog.

Do you have a Manchester Terrier? If you do, we know you must be proud to own this special little dog breed.

We would love for you to share your dog's pictures and his/her story, as well as your knowledge about the breed in general.

You can upload photos and tell your dog's story here.

For inspiration, read some of the stories already submitted by other dog lovers.