How To Stop Puppy Nipping And Biting

If you want to stop puppy nipping and biting, one quick fix is to have something more exciting for him to sink his little razors into! That said, bear mind that much of the behavior stems from plain old teething and is very common.  Take heart, it generally won't last long - about six months.

Puppies will instinctively behave this way from the time they are a few weeks old, but at some point this has to be curbed in the best interests of the pet.

You may have thought that puppy biting and nipping is harmless and just their way of playing and having fun. In part this is true when it comes to socializing and rough housing with each other. 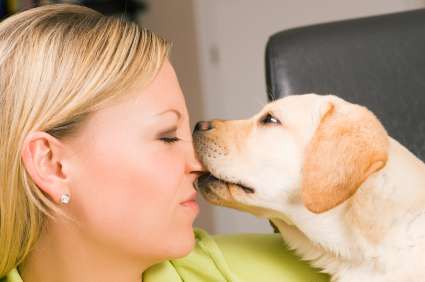 But, although this behavior is a natural way that pups in a litter interact, the real reason for all this puppy nipping and biting during playtimes is to establish their position or dominance in the pack.

During this bitey-play with each other they also learn when they have stepped over the limits of play biting into the more severe nips when the hurt puppy gives out a loud yelp.

Very often the mother will intervene by giving a big push to the nose of the overly aggressive puppy.  Now it's up to you to stop the puppy nipping and biting.

Start bite inhibition training early before the puppies are sent off to forever homes. This will start the process but it should continue as part of their overall training when they are settled.

Their new human family will need to sufficiently reinforce what they have already learned about bite inhibition in the pack, until the pet completely understands that biting humans in any form is unacceptable.

Socialization of your puppy is an extremely important part of this training.

This will get him used to people, places and events that may be fearful or cause stress and become a trigger for puppy nipping and biting. 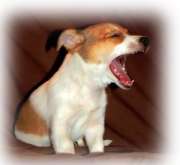 It's also important to differentiate between the puppy biting, mouthing, and nipping that occurs naturally between puppies during their games, versus when that same behavior occurs in playful situations with humans.

If the human doesn't stop puppy nipping and biting at this level or is tolerated, it can be the start of a bad habit that easily escalates to a dangerous level as a puppy matures and gets a sense of his power.

Dogs learn by repeating behaviors. When soft biting or mouthing is repeated over and over with humans during playtime, guess what happens? It becomes a conditioned response every time you play with your pet.

Eventually, when his puppy teeth turn into sharper teeth and you get a nasty nip, you will decide it's time to stop puppy biting!

Left unchecked, a puppy nipping and biting habit can be hard to modify especially when it has become a conditioned response. This is why is it so important to intervene as early as possible.

While biting and nipping at humans should definitely be curbed, not all puppy biting needs to be stopped.

Puppies explore their world through their mouth, biting down and chewing just about everything they discover during their adventures. The key is to channel this behavior into acceptable outlets. 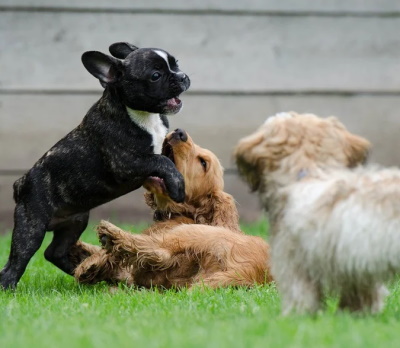 A puppy that is allowed mouthing, chewing, or nipping at your hands, arms, or clothing is going to think he is dominant and you will have difficulty obedience training him thereafter.

This needs to be reversed right away by a clear message to your dog that this behavior is unacceptable.

When you first bring a puppy home, your initial objective will be to make him comfortable and unafraid in his new home and with his new family pack.

Enjoy him and give him a little slack for a few days, but don't delay important training too long.

If you want an excellent training resource to refer at any time to stop puppy nipping and biting, as well as other common dog behavior problems, click the banner below which links to a website we recommend:

This website is run by a top expert in the field of dog training and teaches dog owners the dog behavior modification strategies that work.