The Miniature Pinscher dog breed is believed to be an ancient one as evidenced by the discovery of their likeness in old paintings and sculptural artifacts.

That being said, their true origins are debatable due to the lack of recorded information until around the 1800's. 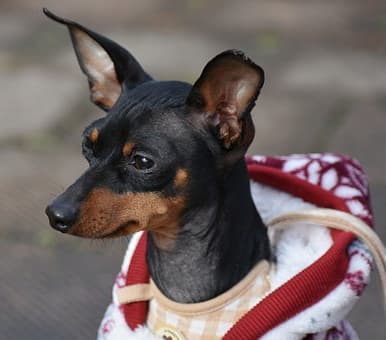 But what we do know is that the Miniature Pinscher dog breed originated in Germany and is believed to be descended from the German smooth-coated Pinscher, Italian Greyhound, the Klein Pinscher from Scandinavia and the smooth-coated Dachshund.

In Germany they go by the name Zwergpinscher - zwerg loosely means midget and pinscher refers to a dog's hunting technique.

Min Pins, as they are nicknamed, have frequently been compared in appearance to a miniature version of the Dobermann Pinscher. Some people also presume that they are actually related to the Dobie which is not the case, the Doberman being a separate breed entirely.

Because of their deer-like features, they also picked up the name of Reh Pinscher, Reh referring to the very small Roe deer that once roamed the forrests in Germany.

Fanciers of the Min Pin like to think him as the King of Toys.

In their early days this breed was primarily used as a working dog and had the unglamorous, but essential job, of ridding farm households and stables of rats and other vermin. 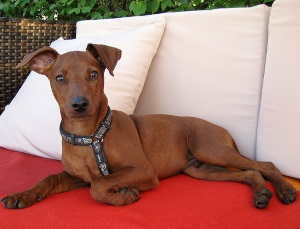 Breeds that are similar in appearance to this breed include the Toy Fox Terrier, the Rat Terrier and the Manchester Terrier.

Ten years after the Miniature Pinscher dog breed first arrived in the United States, a national club was formed to represent them and the breed was shown in the "Terrier" group. In fact Pinscher is the German word for terrier.

However, later on the breed was reclassified into the AKC toy dog breeds, where they remain today.

Miniature Pinscher dogs are compact, yet leggy, little dogs with a seriously confident, cheerful demeanor and fearless nature. While they may be expected to live up to as much as 15 yrs, one has been recorded in the Guiness Book at the grand age of 21!

The Min Pins are very popular pets and make excellent companions. They also enjoy success as a show dog. 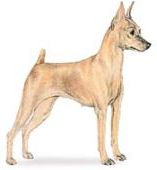 Clean cut and sleek are the words that come to mind in describing this dog. He has a very well-balanced look to his torso and his expression is made ever alert-looking by his erect ears and attentive eyes.

Coat colors per the official standard include the following: black/tan combo, chocolate/tan combo and stag red.

The coat is sleek and smooth and sheds little. Grooming is easily handled by wiping down with a dog cloth and brushing about once or twice a week.

Helpful grooming tools are the ZoomGroom or the glove brush along with a boar bristle brush for finishing.

This breed is sensitive to the cold, so dog coats or sweaters are a good idea on cooler days.

The Miniature Pinscher dog breed is fearless, intelligent, and learns quickly. They have a good reputation as watchdogs, but they can easily become barkers. For this reason, it is wise to train them to be quiet at your command and understand that not every sound is a threat or an intruder!

The Min Pin is not your typical toy dog that is waiting to be pampered - they are feisty and confident and will rule the roost if you don't establish your leadership from the get-go. You should also keep a close eye on them as they tend to scour every nook and cranny in their domain and often in ways that are undesirable.

On the other hand, they are a very loving and devoted breed with a lively spirit, and make excellent, as well as entertaining, pets. The Min Pins also are ideal show dogs being natural performers that enjoy being the center of attention.

How Active is the Min Pin?

If you're not in good shape, this may not be the dog for you! The Miniature Pinscher dog breed is a veritable bundle of energy and fast on their paws too! I kid you not.

It goes without saying that they enjoy - and should be given plenty of exercise in spite of the fact they have probably worn you out with their high jinks around the house.

A large area where they can run freely is just the ticket for you and the dog, in addition to a substantial regular walk.

Do make sure your property boundaries and gates are secure as the Min Pin will be "outta there" if he finds a vulnerable spot to escape. Let's not forget that he has springs in his legs when it comes to jumping too!

Bearing in mind the activity level recommendations noted above, the Min Pin is not fussy about space and will adapt easily to either house or apartment. Heck, he doesn't take up much room!

But if you live in the latter, it will work out much better for you and your neighbors if your dog has learned the "quiet" command.

Well Yes and No. The fact is, Miniature Pinschers can be a handful and are not at ease around young children. They can be snappy if pestered, poked or teased.

More mature children over the age of 11 would be a better fit especially if the family has previously had a dog.

Aside from that, one thing's for sure, if you do have children, make sure an adult supervises their activities with pets.

The Miniature Pinscher is a very protective breed that can make a devoted companion to any dog lover. That's the good news! But, you know there's a but coming...

...he won't do well in a sedentary household without a place where he can run freely and where someone is available to take him out for daily exercise.

If you happen to be active seniors with a sense of humor who enjoy high-energy pets, you'll find the Miniature Pinscher dog breed right up your alley!