Unlike a lot of other dog breeds, Doberman Pinscher dogs are a relatively new breed. It was not until the 1860s when a German tax collector by the name Louis Dobermann began crossing a variety of dog breeds to include Beaucerons, Greyhounds, Manchester Terriers, and German Pinschers that their development began. 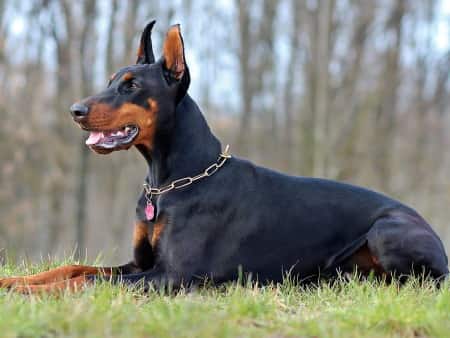 As part of Louis Dobermann’s job, he often traveled throughout crime ridden areas, leading him to realize he needed a reliable and faithful dog for protection.

Obviously named after the creator, Doberman Pinscher dogs were unknown to the rest of the world until 1876 when the breed was first shown.

With the public being intrigued and impressed, popularity of this new breed grew quickly. However, the American Kennel Club would not recognize this kind of dog as an actual breed for another 32 years.

Although most people see the Doberman as a personal protector, the truth is this breed has been used successfully for law enforcement and military work, as a search and rescue dog, in obedience and show competitions, for tracking, and even for therapy services.

He's also added his charisma to a few roles in the movies including "Father of the Bride" part I and II, as well as a significant role in the movie "Hugo".

Most people immediately think of watch or guard dogs associated with this breed and while Dobermans do possess traits that make them protective, they are also very dedicated, affectionate, tolerant, and loving.

When in working mode, this animal tends to be somewhat bold and assertive but as a pet, this dog is a joy. However, only experienced handlers should own this kind of dog, someone capable of being the pack leader since this breed has an alpha personality. The owner should be able to display authority on an appropriate level while showing confidence and consistency.

With proper training and socialization while young, the Doberman breed makes an excellent therapy dog as well.

When coming from a reputable breeder and owned by the right people, Doberman’s are actually very sweet, always working hard to please its family with anticipation of love and affection in return. 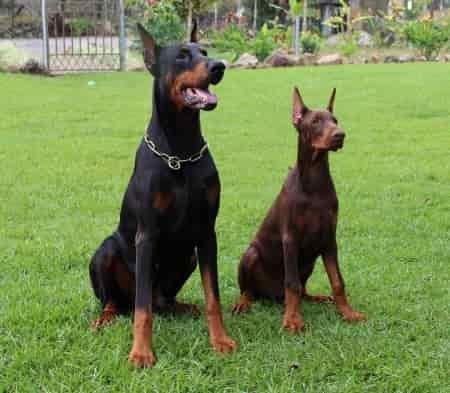 Regarding height and weight of Doberman Pinscher dogs:
Males typically measure: between 26 and 28 inches at the shoulders while weighing up to 88 pounds.
Females measure: between 24 and 26 inches but usually weigh less, sometimes as little as 65 pounds.
However, both males and females of this breed share the same muscular body structure.

Additionally, most Doberman dogs have the ears taped for several months or cropped, helping them to stand erect although ears left natural are also accepted by the American Kennel Club.

The tail is also docked in most cases while only a few days old, but if left in tact, its appearance would be similar to a hound’s tail. Although both ear taping/cropping and tail docking is done in most countries, these practices are considered illegal in Europe.

Coat Colors: Most recognizably, the coat is black with dark brown markings, but Doberman Pinscher dogs also come in various shades of brown and steel blue, as well as rare white varieties. 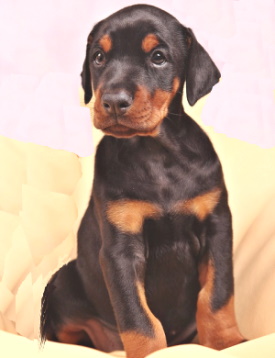 The coat is very short but also quite thick and hard. Depending on the actual dog, a gray undercoat grows around the neck area although it cannot be seen. While black and brown are the more common colors, there is a pure white type of Doberman.

As mentioned, this breed has brown markings that cover the muzzle, front chest area, throat, legs, feet, above each eye, and on the tail. Brown markings qualify for show and professional breeding whereas white markings are considered a defect.

While Doberman Pinscher dogs shed, the amount is only slight. With the hair being so short and tight, only occasional brushing is needed. Other than that, grooming of this breed would involve baths, ear cleaning, and trimming the nails as needed.

Unfortunately, Doberman Pinschers are prone to a variety of health issues.

Interestingly, white Doberman Pinscher dogs have the same genetic makeup as the white lions and tigers owned by the famous Las Vegas duo, Siegfried and Roy.

Although some experts believe this gene puts white Dobermans at risk for other health problems to include mental instability, blindness, and deafness, other experts totally disagree, stating no concrete evidence exists to suggest adverse health concerns would develop.

How Active Are Dobermans?

Doberman dogs are highly energetic, intelligent and possess great stamina and strength. They need to be routinely well-exercised, played with on a regular basis, run off-leash if possible, and ideally enrolled in some dog sports activities.

In addition to physical exercise, this breed must have mental stimulation. Otherwise, these dogs become bored and agitated, which can lead to destructiveness and other unwanted behaviors. The best way to keep a Doberman happy is with ongoing training.

Dobermans need constant direction and leadership from owners, as well as interaction with people. For this reason, this dog breed would not be considered suitable for outdoor life.

In addition, Dobermans should never be kept for long periods in a kennel, which again would create anxiety and even fear.

With this breed being of medium-size and with little shedding, it is recommended that they be kept indoors, provided there is enough space for moving around and playing.

As mentioned, Doberman Pinscher dogs should always go through obedience training and be socialized while young because this dog has a stubborn streak that could get out of hand.

However, when properly trained and placed in the right home, even those with children, this breed loves being a part of the family.

Although the Doberman is naturally protective, training, socialization, and regular exercise can make this breed a choice for experienced dog families with children.

That being said, children should be taught the appropriate way of petting and handling any breed and adult supervision is recommended when they are interacting.

Although Doberman Pinscher dogs are gentle, loyal, and patient, they would not make a good choice for seniors or sedentary families.

Because this is a breed that requires a strong owner who can take a leadership role, plus provide consistent training and exercise, the right home environment is a much more critical choice.

If you're a proud owner, breeder or fancier of this breed, we'd like to hear from you.

There's nothing like first hand information to help someone who is considering a particular breed for their family and your knowledge can be enormously helpful.

Please share your insider information and experiences of living with and loving this striking dog breed. You can tell your story here 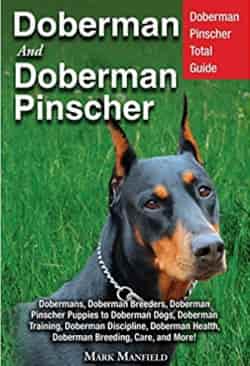 Up-to-date resource for those considering this breed for their family.  Includes history of the breed as well as characteristics, behavior, training and care. Also advice on purchasing a Doberman puppy. Good Photos. 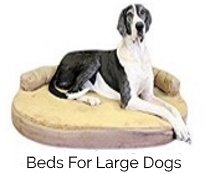