The Chinese Shar-pei dog is an ancient breed that originated in China and although its lineage is not well-defined, many believe the mastiff and chow chow breeds were involved in its development.

Early history reveals that the Shar-pei's purpose was as a working and hunting breed. Some time later they were introduced as fierce contenders in the dog-fighting arena.

Thankfully this "sport" faded away when the country became a communist nation, but, sadly, dogs were also pretty much eliminated during this transition.

However, although this caused a steep decline in Chinese Shar-pei dogs, fanciers came to the rescue, among them most notably a gentleman by the name of Matgo Law from Hong Kong who was instrumental in getting a few of the breed into the hands of American and Canadian breeders.

This time around, breeders worked toward developing the breed's temperament for family companionship.

You will not easily forget this unusual dog breed once you catch sight of his abundantly wrinkled appearance.

In case you might be wondering about what the "Shar-pei" name means, a rough translation is: draping sand paper like skin - a reference to its unique short and rough coat.

Another extremely rare feature is a blue-black tongue - a characteristic shared only with the chow chow breed.

Nowadays, having left his former lifestyle far behind him, the Chinese Shar-pei dog is a popular family companion and a frequent participant in the show dog arena.

Characteristics of the Chinese Shar-Pei Dog 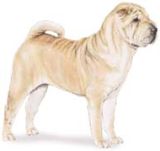 At one point, not too long ago, the Chinese Shar-pei dogs were very rare and extremely sought after which resulted in a rash of irresponsible breeding.

This, combined with its not too distant history as an aggressive fighting dog, means that there can be a variety of temperament and traits, both favorable and unfavorable, seen in the breed. It is another case where a reputable breeder should be sought by those interested in the breed.

While the Chinese Shar-pei dog has in general been proven to have many positive qualities, such as loyalty, courage and affection, he can be quite independent. One thing to keep in mind, is that they need an experienced owner who can confidently train them with consistency, but never harshly.

They respond very well to their master's praise and rewards, yet are quick to spot any weakness in him.

Early socialization is recommended to get this unique breed, that is sure to attract attention, used to people contact plus a variety of experiences, places and situations, as well as meeting other canines.

When it comes to house training, the Shar-pei is a quick learner, if this is started early - say in the first three months - before they start testing you!

The acceptable coat colors of the AKC standard are limited to solid and sable. It is permissible for the solid colors to have darker shading of the dominant color on the ears, down the back and throughout the coat.

The shading must be variations of the same body color and may include darker hairs throughout the coat. Disallowed colors include albinos, brindle, parti-colored, or patterned.

The standard coat is one that is harsh and completely straight and stand-offish on the main body area, while being a bit smoother and flatter on the legs.

Alternatively, it may have a very short coat - referred to as a 'horse coat', or one not longer than 1" - known as a brush coat.

The brush coat sheds a light amount year round, while the horse coat has periods of heavy molting. Both coats can benefit from the use of a FURminator to remove dead hair and keep the coat healthy.

The Chinese Shar-pei dog can be affected by the following conditions:

Learn as much as you can about the parents health before you invest in a puppy.  And, have a reliable vet at the ready to evaluate the puppy's health soon after you acquire one.

How Active is the Shar-pei

Most definitely, this breed needs a good walk each day. Keep an eye on the temperature though for this is another breed that doesn't tolerate hot weather very well.

In addition, a chance to romp and play outside in the yard, will be very appreciated.

An uncrowded house and yard where the Shar-pei dog has some space, is the ideal situation.

Outside areas should have shady spots plus the availability of water at all times out of consideration for the Shar-pei dog's sensitivity to higher temperatures.

Does The Shar-pei Enjoy Children?

This breed is best suited to families with young adult children who are more mature in their respect for pets and have had previous opportunities to interact with them.

As with any breed, it is always the recommended policy to have an adult supervise interactions between children and pets.

A Suitable Companion for Seniors?

The Chinese Shar-pei dog would not be the most ideal companion for seniors unless they have considerable experience handling dogs as an "take charge" owner.

Exercise needs also need to be provided by someone in the family on a daily basis.