In recent years, this toy dog has become quite popular to own since it was first recognized by the AKC in 1991 and has moved up the charts for the number of registrations. 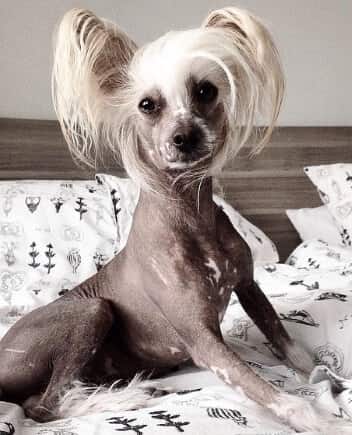 However, the Crested was admired much earlier than before it became an official breed, popping up frequently in dog shows as early as the eighteenth century.

The Chinese Crested is a sporty little dog that can be very successful in competitive sports such as agility and lure coursing.

He has a reputation for being eager to please and mostly easy to train.

Some owners do however say that house training is a tad more challenging and the use of litter boxes may be a consideration. Aside from that, they are a great house pets - entertaining, quiet and with a very sweet disposition.

The Crested breed is the perfect little dog to dress up in some fun dog clothes - if even just to provide a bit more protection for his exposed skin.

You wouldn't think there would be any debate about where the Chinese Crested dog came from based on its name, but there is! Because it has been spotted in many countries far and wide and is an old breed, no one knows its exact origins for sure.

On the one hand, there are those favoring China as the obvious roots, while others speculate that it came to China from warmer regions such as Africa or Mexico, due to the hairless feature of this dog.

Whatever its true roots, the Crested is believed to have once been a much larger dog that frequently traveled aboard sailing ships performing its duties as an excellent ratter.

And, there seems to be a general consensus that the breed is quite ancient, dating back to the Han Dynasty.

Over time it was bred down to the sweet delicate-looking little dog that it is today.

Appearance And Grooming of the Chinese Crested 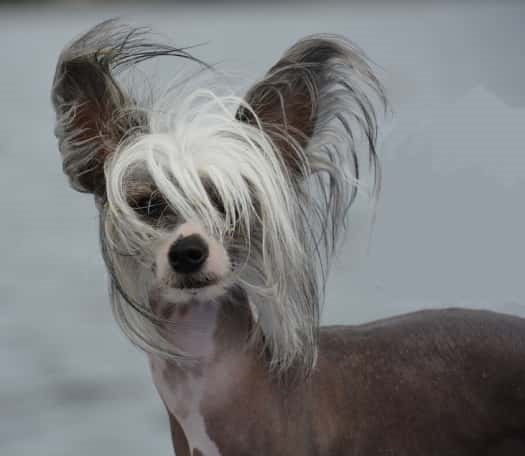 The Crested is very unique in appearance with a doe-like delicacy. It is an unusual and rare breed with two varieties - one almost completely hairless and the other, the Chinese Crested powder puff, having a soft double coat of hair.

It is not uncommon for both varieties to appear in the same litter since this breed carries an incomplete dominant hairless gene that, when recessive, can be expressed with hair as in the Powderpuff variety.

Height: 11-13 inches
Weight: Up to 12 pounds
Skin Color: From pink to black, mahogany, blue lavender and copper - it can be spotted or solid. The minimal hair can be any color.
Origin: China (best guess, but up for debate)
Classification: Toy Group


This is quite a rare and intriguing toy dog breed that often does not have a full set of teeth. Its lifespan is generally in the range of 13 to 18 years.

The hairless Chinese Crested does need UV sunscreen protection for dogs when outside. It is also a good idea to apply hydrating skin lotion fairly often to prevent dryness. Bathing should be done as needed.

The Chinese Crested Powder Puff variety needs to be trimmed and brushed to maintain its coat in good condition and keep it free of mats which can occur more easily in the longer outer coat. Both need fairly frequent bathing.

Being another thin-skinned breed, the Chinese Crested dog breed is affected by the weather when it is the cold or damp and can use a dog coat most of the time. And, because of the delicate nature of their skin, a softer hypoallergenic collar - such as a hemp dog collar is a good idea.

The Chinese Crested dog breed has a projected lifespan of 13-18 years. The common issues that have been mainly noted in the breed are related to the following eye disorders:

PL occurs when the kneecap becomes dislocated.  LCP causes degeneration of the hip joint and is often indicated/spotted when a dog starts limping.

Both of these orthopedic problems are common among small dogs and may be helped by surgical intervention. Untreated, they may lead to arthritis.

One other condition that occasionally affects the Crested is Epilepsy.

The following tests are recommended by the American Chinese Crested Club:

Professional breeders are usually well-informed on these health matters and will complete  the tests suggested by the club. Those seeking a puppy should definitely ask to see the results of testing.

How Active is the Crested? 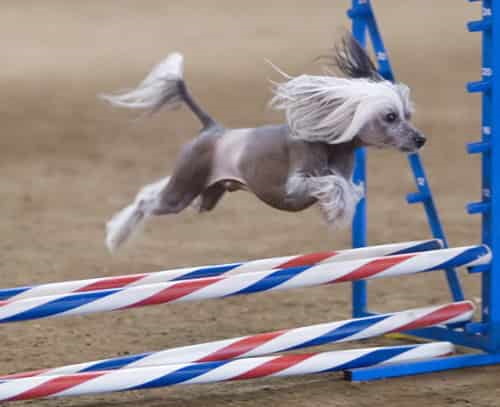 The Chinese Crested dog breed is very playful and stays quite busy inside the home. Exercise needs are modest, and outdoor activity can be limited.

That being said, this breed enjoys and does very well in agility competition.

Weather should be considered when going outside because of their direct skin exposure to the elements. On very hot, as well as cold days, out door activities should be limited.

A light dog coat or sweater provides some sun protection and a heavier one is desirable on cooler days.

Weather permitting, the Crested needs at least a short walk and some fresh air on a daily basis if possible. A small dog carrier makes it very convenient to take your small dog along whenever you go out.

This breed is an ideal choice for apartment dwellers or small homes. Although they are quite active indoors, they do not need a lot of space and they are not noisy.

Be aware, however, that they are curious little dogs and good climbers so early training is advised to establish what's off limits.

They can get along quite well most of the time without a yard.

The Chinese Crested With Children?

The Chinese Crested dog breed is good with all children, but especially older children who are considerate of pets.

They enjoy a lot of interaction with their family and are known to be gentle. However, one thing to note is that younger children might not be so aware that this miniature dog breed is a delicate pet and may be easily injured during play.

It is advisable to have an adult monitor activities when children are involved so that both the child and the pet remain safeguarded.

As A Companion For Seniors?

The Chinese Crested dog breed is a very loving toy dog and makes an excellent choice for the retirees, seniors, sedentary families, or those who cannot get out very often.

The Crested bonds easily with his family, has a low exercise demand and his playfulness can be quite entertaining.