The Bloodhound Dog
Follows a Trail Like No Other!

The Bloodhound dog is said by some authorities, to date back to ancient Rome and Greece. Later, around the 8th century, the hounds were bred at a monastery on the border of France and Belgium and became know as the St. Hubert hound. 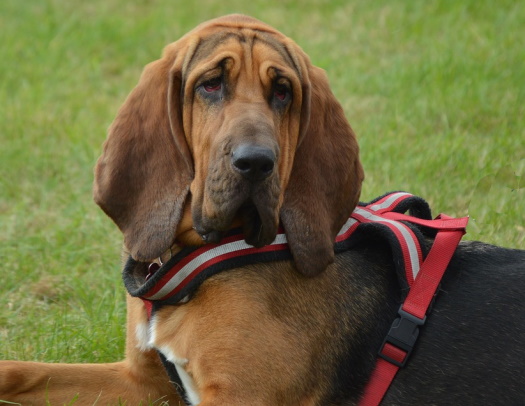 And so began the line that eventually arrived in England around the 11th century, along with the Norman invaders. Further selective breeding continued and subsequently, the breed became known as the Bloodhound (of pure blood).

This dog is easily recognizable by its deeply wrinkled face, long mouth and pendulous ears. His solemn expression fits right in with the nature of his serious job assisting in detection work, as well as search and rescue.

However, in much earlier times his cold scenting abilities were used in trailing wild boar and deer. When the prey was located, the hot scenting pack hounds took over until the prey was brought down.

The excessive folds in the skin of the Bloodhound, are said to capture and direct the scent particles to his nose.

The Bloodhound dog breed is mild mannered, has good disposition, is dignified and gentle. These are words that come to mind in describing this lovable dog.

Although his face has a sad look, underneath there is a friendly and affectionate hound that enjoys family life - he'd actually be a lap dog if it weren't for his size!

The Bloodhound can be more of a challenge to obedience train for an inexperienced owner. First time owners of the breed should be confident that they can provide strong leadership.

This should not be construed as harsh, but rather a firm yet fair approach to training, without compromise.

Drooling is a trait of the Bloodhound that must be considered before selecting this breed, especially if one is a meticulous housekeeper.

Second to that, is the fact that this is one big dog with a big appetite, so the food bill is going to be more significant. 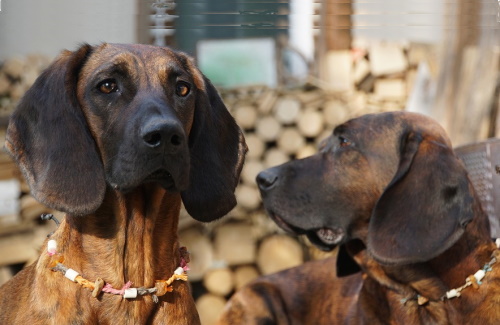 Health of the Bloodhound Dog Breed

The Bloodhound, sadly, does not have a very long life expectancy - around seven years is the average! But, if you are an optimist, it is worth noting that some have lived up to twelve years!

New and prospective owners should be aware that GVD or bloat as it is commonly known, is a major cause of death in this breed.

This is a life-threatening emergency condition that requires immediate attention. But, we like to think that knowledge is power, or forewarned is forearmed.

The point being that information about how to help your dog avoid this condition is available. You can find out more about canine bloat here.

Other significant health concerns include:

It is also noted that the Bloodhound dog does have a higher than average amount of eye, ear and skin problems.

Coat and Care: Rub down the dog's coat frequently to remove loose hair, and give a complete bath on an as-required basis. A circular motion works best on his thick short coat.

Like most dogs with long pendant ears, they need inspection and cleaning once a week to prevent infection. In this breed the nails should also be kept short.

This dog is very strong and has lots of stamina. He needs to be taken out for a long walk each day at a minimum.

Having a secure place to run freely would a real plus.

Surprisingly the Bloodhound can live in an apartment, providing he gets taken out and thoroughly exercised on a daily basis.

A house with large yard where he has room to romp and run would be the best situation.

The Bloodhound With Children?

Very good with children, in fact too good! The Bloodhound dog is so tolerant that they will put up with more than they should. A great family dog for households with considerate and kindly youngsters.

Remember, the best policy is to always have an adult supervise when pets and children are interacting - no matter what the breed's reputation.

The exercise needs of the Bloodhound dog would not make it very suitable for inactive seniors or any family that likes to be more sedentary.

First and foremost, those considering the breed are encouraged to read this book to make sure the Bloodhound - a very unique dog - is right for them.

It covers: finding your puppy plus everything an owner needs to know including detailed information regarding training, exercise, grooming, feeding, and a lot more. While it's a given that the Bloodhound has the ability to follow a scent, this book has advanced training on "Using Your Bloodhound’s Nose" - for nose work.