The development of the Wirehaired Pointing Griffon dog, also known as Korthals Griffon, is mainly credited to Eduard Korthals from Amsterdam.

Korthals had a great love of hunting which induced him to develop a canine hunting companion that could work in a variety of terrains including the swamps and marshes prevalent in his country. 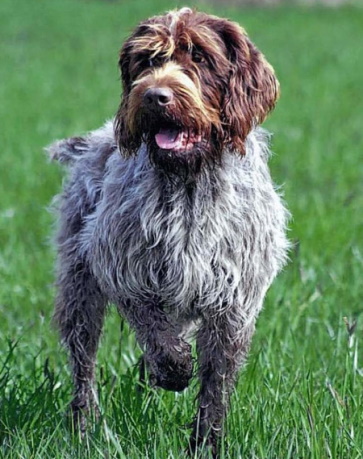 To this end, he embarked upon a very selective breeding program with the aim of developing a swift dog of high intelligence, keen nose, weather resistance, and having the ability to work over land and water with great endurance. Spaniels, pointers and retrievers were included in the breeding stock to contribute the traits needed for such a versatile hunting dog.

The dog that ultimately resulted was a remarkable hunting dog that more than lived up to his expectations and was called the Wirehaired Pointing Griffon, although for a while it was known as Korthals Griffon in recognition of his work.

The Griffon dog breed did not arrive in America until 1887. Subsequently, it was cross bred with the Cesky Fousek. The WPG of today is a medium-sized dog with strong limbs, a bristly coat and webbed feet. His amber eyes are almond-shaped and his muzzle is distinguished by an appealing, yet unkempt-looking, beard and mustache. 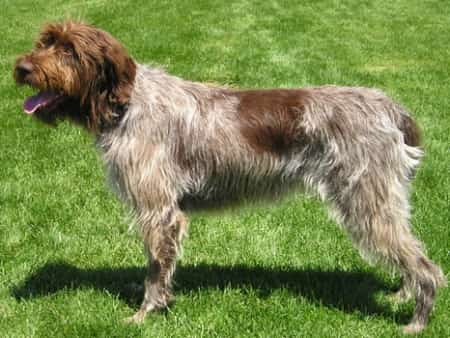 This breed is both confident and decisive and is considered an excellent all-around field dog, working both on water and land. He has also been successfully involved in search and rescue work.

The Griffon's water repellent coat is straight and harsh with a short fine undercoat providing good protection for cold or hot weather. He has soft covering over the eyes and a distinctive shaggy beard around the mouth.

While the Griffon's appearance may look kinda casual, the coat still needs the proper care to keep it healthy.

That being said, coat maintenance is not arduous and can be managed with a weekly brush and comb, and trimming of the ear canal hair. A few times a year he does need to have his coat stripped to allow new hair to come in.

Shedding is minimal which could be more suitable for people who suffer with allergies. And with the use of a ZoomGroom, getting out the dead hair is a simple matter, plus a lot easier on the dog's skin than a bristle brush.

The Wirehaired Pointing Griffon dog is intelligent and very trainable. He is an excellent hunting companion and worker, being highly skilled in swimming and retrieving and possessing remarkable scenting ability.

The Griffon also makes a loyal and affectionate family companion that aims to please.  He will also quickly warm up to children and those you identify as friends!

While not aggressive, he has a healthy reserve around strangers until he is assured that they do not pose a threat.

This trait makes him a natural watchdog that will alert you to anything out of the ordinary, but he is too laid back to be considered a guard dog .

The Wirehaired Pointing Griffon is considered to be a generally healthy breed, but may be susceptible to one or two common dog diseases.

These would be PRA (Progressive Retinal Atrophy) and hip dysplasia.

If you are thinking about getting a Griffon, it would be prudent to ask the breeder if the parents (sire and dam) have OFA (orthopedic) or PennHIP (hips) clearances.

A good breeder will gladly provide this information - probably without you asking for it.

Definitely on the high side and he needs a family that can handle it.

Games of fetch and swimming are very enjoyable activities for this breed. The WPG needs a considerable amount of exercise and vigorous walks every day to dissipate his high energy.

If you have access to a place where he can swim, this will be an ideal outlet for his exercise. To avoid the Griffon becoming hyperactive and bored, make sure he gets thorough workouts.

If you have children old enough to throw a frisbee for him, he will  love it!

How Much Space Does The Griffon Need?

he will do best in a rural home with a considerable yard and secure fencing as well as open areas where he can run freely.

He does not do well if isolated for very long and will get into undesirable mischief if relegated to be left alone outside.

Apartment living to be avoided if possible.

Is the Griffon Good With Children?

The short answer is yes!

The Wirehaired Pointing Griffon dog has a friendly disposition, and gets along well with children that have been taught about the care and handling of dogs.

But, as with any breed of dog, interactions between them should always be supervised by an adult.

The Griffon will usually get along well with other pets (except maybe not rabbits!).

While a sedentary family may enjoy this charming and smart dog, they would likely find the exercise needs too demanding for their lifestyle.

The exception being if these daily responsibilities can be outsourced.

Do you have a Wirehaired Pointing Griffon dog? If you do, we know you must be proud to own this intelligent and robust dog breed.

We would love for you to share your dog's pictures and his story as well as your knowledge about the breed in general.

You can upload photos and tell your dog's story here. For inspiration, read some of the stories already submitted by other dog lovers.