Saluki
A Hound of Grace and Speed!

The Saluki is a beautiful and prized dog that is believed to date back to around 6000 BC. Proof of its very ancient existence has been found in carvings from that period depicting strong likenesses to this hound. 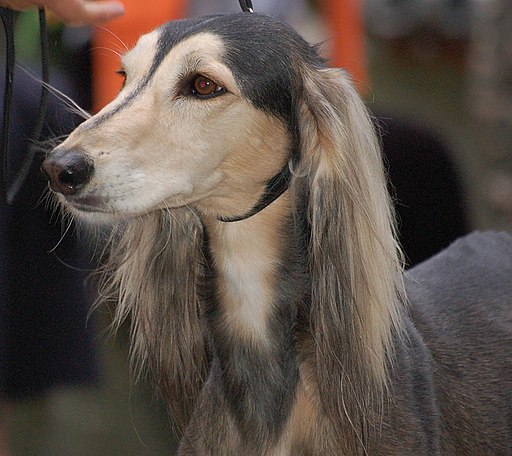 In addition, other old engravings have also been discovered illustrating the dog's hunting abilities, for which it is well known.

This breed became favored by the pharaohs and were highly esteemed by them. Mummified remains have been discovered in the royal tombs of ancient Egypt to indicate their importance and value.

The Saluki is a sighthound, also known by other names, including the Persian Greyhound, Gazelle Hound and Arabian Hound. Its graceful and elegant body is similar in appearance to the greyhound. 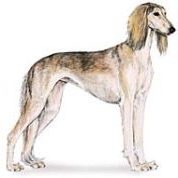 It was used in Arabia, Egypt and Persia to hunt gazelles, using its excellent vision to see far into the distance and remarkable speed, which can reach up to 40 miles per hour.

The breed is also known to have superb hearing, picking up the slightest sound long before any human awareness.

They are among the oldest of hounds and their hunting instincts are deeply ingrained.

Characteristics of the Saluki Dog Breed

If you want a dog that is comforting when you're feeling down and out, or playful when you're in a great mood, then this is your dog!

The Saluki is known for his sensitive and loyal nature and will react to your moods as well as the environment.

At the same time, because of his sensitivity, he needs a gentle approach and lots of praise when you are training him. Harshness won't work with this breed - actually, it usually doesn't work with any breed!

As a family companion, the Saluki is affectionate, intelligent and makes a good watchdog. 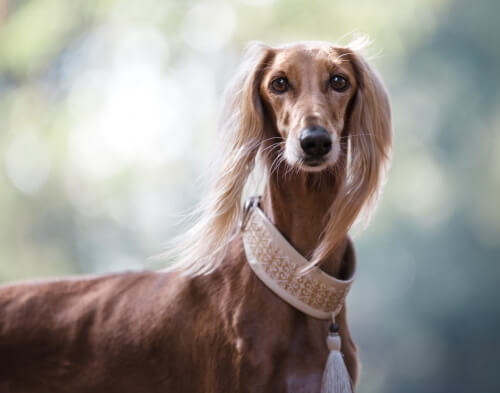 The lifspan of the Saluki dog breed is in the range of twelve to fourteen years with good care.

It has been reported from a British survey, that cancer is the main cause of death in this breed with lymphoma and liver cancer being the two most common types.

Secondary health issues to be aware of are related to heart defects.

There are two coat types. The more common is smooth and silky, with feathering on the legs, back of thighs and long silky ears. The other coat type is short and smooth all over.

This breed sheds about average and grooming is handled quite easily by occasional brushing. They are considered a naturally clean dog and another nice feature is that its coat is basically odor free.

How Active is the Saluki?

These dogs enjoy and should ideally have a lot of exercise. They love to run, but this should be done on leash considering that they would by natural instinct, chase after a rabbit or small animal if given the chance.

The Saluki has awesome stamina and can run at a very high speed. If you happen to be an athletic type who can run at a good clip, this dog, when conditioned, would have no trouble keeping up.

This breed does best in a house with a decent size yard in which to run and enjoy some playtime with you.

Additionally, a doghouse is ideal when they are outside to protect them from sunburn, but they should sleep inside overnight for warmth because of their lean bodies.

Children and the Saluki?

Best with older children who have previously lived with pets and have been instructed how to interact with them while being gentle and considerate.

As always, caution and supervision is recommended whenever children play with dogs of any breed.

Size and exercise requirements might rule out the Saluki as the best choice for the senior or more sedentary family.

However, its loyalty and love would rule it in! So, if daily exercise can be arranged and you love the breed, then it's a consideration.

Saluki: The Desert Hound and the
English Travelers Who Brought It to the West

A detailed and extremely well-researched fascinating book about the ancient Saluki dog breed also referred to as the Desert Hound. This book tells the story of those who brought the Saluki to the West, most notably Florence Amherst, who discovered the dogs while in Egypt and went on to breed 50 litters. Many other travelers fell under the Salukis' spell including Lady Anne Blunt,