Rhodesian Ridgeback Dog
A Nice Mix of Loyalty and Courage!

The Rhodesian Ridgeback dog is a native breed of South Africa and is believed to be descended from dogs kept by the Hottentots around the 15th century. Prior to that time, their heritage is speculative, possibly originating in Asia.

As European immigrants arrived, bringing various dogs with them, their dogs were ultimately interbred with the Ridgeback. Some of the breed stock most likely included Terriers, Greyhounds, Great Danes, Pointers, Mastiffs, Salukis, and other breeds. 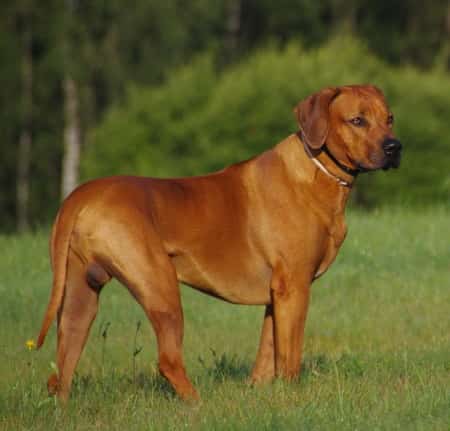 Sometimes referred to as the Safari dog or African Lion Hound, the Rhodesian Ridgeback dog was developed to hunt big game, including lions, earning them the right to be esteemed for their courage.

In the United States, they have been used on hunts of wild boar, mountain lions, bear, deer, and coyote, using their keen abilities of sight and scent.

Celebrities such as Patrick Swayze, Nelson Mandela have enjoyed the Rhodie, as well as Errol Flynn who was also a breeder of them.

Appearance of the Rhodesian Ridgeback Dog 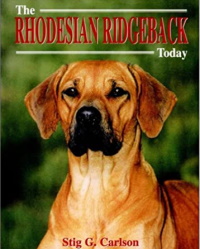 The "ridgeback" part of their name refers to a strip of very coarse hair growing down their spine in the opposite direction from the main coat.

This physical characteristic is unique to this breed and some experts say it is could be a confirmation of the link to the Hottentots Dog - now extinct.

They are a strong and good-looking dog with an athletic build. Lifespan for the breed is up to 10 years with good care.

Rhodies have a short, dense and sleek coat that sheds little and has minimal odor.

Weekly brushing will keep the coat in good order. Bathing is required very occasionally, but ears and nails should be given more regular care.

Ears of the folded over type, such as this breed's, are always more prone to ear problems such as mites or infections, making frequent ear cleaning advisable.

Characteristics of the Rhodesian Ridgeback

Rhodesian Ridgeback dogs are affectionate and loyal to their owners. Although they have a even temperament and seldom bark without reason, they are ever alert and ready to protect the family.

Rhodies are blessed with high intelligence and have minds of their own. For this reason, obedience training is strongly recommended to establish your role as the "alpha presence".

This dog needs strong leadership, otherwise, they will happily rule the roost. However, on the plus side, they are very responsive to training and once this is accomplished, will become a very obedient companion.


Health Issues Associated With The Breed 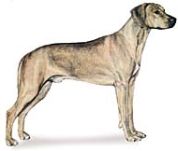 The Rhodesian Ridgeback dog is linked to health concerns affecting the heart, thyroid, joints, eyes, as well as incidences of cancer and bloat.

Responsible breeders of the Ridgeback will conduct appropriate test to survey these areas as part of a health evaluation:

Activity Level of the Rhodie

The Rhodesian Ridgeback dog has a lot of stamina and energy that needs to be put into motion. Daily exercise is a must.

Hour-long walks are the ideal plus other types of vigorous exercise.

If you are a jogger or hiker, Rhodies will be more than happy to join you. They are very athletic dogs.

Look for behavior problems if they are not sufficiently active.

The Rhodie is one of the hound dog breeds that is adaptable to either house or apartment, as long as they are given sufficient exercise.

Ideally, Rhodies would do best with access to an outside area for them to run.

The Rhodie With Children?

Best in a family with considerable dog experience and with older mature children, who understand how to handle pets with respect while establishing leadership with them.

While being a loving family companion, they can be over-whelming for young children.

As with any breed of dog, we recommend that owners always have an adult present when pets and children are interacting.

Being a very loyal and adaptable breed, the Rhodesian Ridgeback dog makes an excellent companion. However seniors would need to have had extensive experience with dogs to handle this independent breed.

However, in a more sedentary family, their exercise needs still must be met by some family member, a friend or an outside dog service.

Helpful advice about selecting a Ridgeback, plus health and genetics, general care and nutrition, temperament, the versatile Ridgeback. Also emphasizes the importance of training the Ridgeback from an early age. A brief history of its origins is included along with full color photos.