Since those two names don't just roll off the tongue, someone must have come up with the nickname PON and it stuck, so well in fact that they are referred to as the PON both here and in their native Poland. 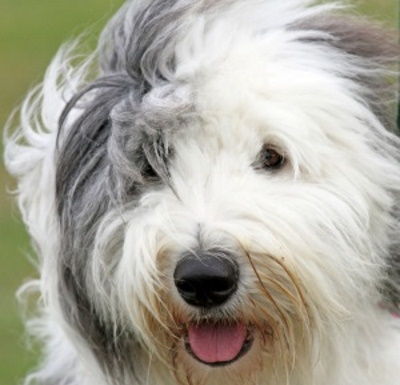 Development of the PON is believed to have occurred before or during the 16th century when Polish long-coated sheepdogs were crossed with the Puli.

Not much later the PON arrived in Scotland aboard sailing ships and a few of them were traded in exchange for livestock. It is believed that these new arrivals became part of the breeding stock that developed the Bearded Collie.

PONs are well-balanced, strong and muscular dogs with profuse shaggy coats that gives them a very attractive and amiable appearance.

Although the head looks a bit out of balance, it is in proportion to their medium-sized body, but appears larger due to an abundance of hair that covers the eyes, forehead, cheeks and chin.

When you can catch a glimpse of their eyes, the color should be brown or hazel.

The original purpose of the Polish Lowland Sheepdogs was as working sheep dogs and guardians of the flock. They were ideally suited to this role because of their strength, excellent herding instincts and fearless nature.

Although, the breed nearly became extinct during the devastation of World War II, enthusiasts kept enough of the PONs going until eventually they were registered with the Polish Kennel Club when it was formed in 1957.

These lovable herding dogs now enjoy a popularity in the show ring as well as in the family home.

Height: Males 18-20 inches; Females 17-19 inches
Weight Range: 30-50 pounds
Coat colors: Although any coat color is acceptable, the most commonly seen are white with either black, gray or sandy patches and gray with white, or chocolate. Most puppies will have a darker color initially which fades as they become adult.


Coat Care - The Long and the Short Of It

The Polish Lowland Sheepdog has a weather-resistant double coat. It is very shaggy-looking, long and thick and more or less straight. The undercoat is soft and dense.

There is no getting around it, owners of a PON must be willing to groom their dog on a daily basis to keep the standard coat free of mats and tangles.

Special attention should be given to these trouble spots: elbows, thighs, feet and stomach/groin, behind the ears, between the toes and pads of the feet. Also, the ear canal needs to be trimmed.

The basic grooming tools for this type of coat called a "crisp" coat, includes at least one, preferably two, high quality brushes, and a good metal comb. For removing mats and tangles, a de-tangling spray is also very helpful.

It's important not to skimp on grooming tools and risk damaging this extraordinary coat.

Interestingly, while this breed is not a heavy shedder, much of the loose hair he does shed will get caught up in the long coat if not brushed out.

Overall, dogs with coats like the PON do get messier and need more attention if you don't want outdoor stuff brought inside the home!

On the other hand, if you prefer less grooming and don't plan to show your pet, the alternative is to have the coat trimmed much shorter and they will still look adorable! 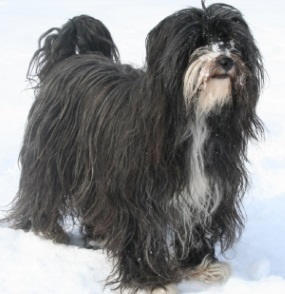 Characteristics of the Polish Lowland Sheepdog

The domesticated PONs have adapted their pastoral instincts toward protecting and loving their human family flock.

They are loyal and lovable pets that have affectionate and sometimes clownish personalities. They are always eager to please and very trainable companions.

The guarding traits of the PON make him a bit reserved and wary of strangers until he is satisfied that they pose no threat.

Although they are not barkers, they will let you know when potential intruders (aka visitors) are approaching your home. Don't worry, the PON is also known for having a very good memory and will remember your friends!

Like most working dogs, these sheepdogs are both intelligent and independent thinkers. As such, they can be a tad stubborn and need a strong leader, as well as training that is firm, yet fair and consistent.

The PON will benefit greatly if he can take charge of some responsibilities around the house. From the time they are a puppy, PONs need to be well-socialized and exposed to a variety of situations, events and people, so that later on they will be able to intelligently differentiate between the things they encounter.

Activity Level? I'm a Sheepdog, what more can I say!

Some of their exercise can take the form of agility games that you play with them, such as flyball or frisbee.

In addition, daily vigorous walks or jogging with a family member will provide them with the physical outlet they require.


Polish Lowland Sheepdogs - Give Us Some Space!

Being a dog with its roots in the countryside of Poland, a rural property with room to run will beat out any other as the ideal setting.

That being said, many of these dogs have adapted to living in apartments. The key is to make sure that the PON receives a considerable amount of daily exercise.

The Polish Lowland Sheepdogs are gentle and get along well with children if raised with them. They are playful and loving with well-behaved children who are respectful of dogs.

One thing to consider is the age and size of your child with respect to a rambunctious young puppy that can easily herd kids around and may accidentally knock them down.

The best policy no matter what the breed, is to always have an adult closely supervise activities between pets and children.

The Polish Lowland Sheepdog bonds closely with their owners no matter what their age and have been used in therapy situations.

An senior or sedentary person may be lucky enough to find one of them that is mature and has a more mellow demeanor.

Two important considerations would definitely be grooming and exercise, which are more intense with this breed.

Dr.Pitcairn's Guide to
Natural Health For Dogs And Cats