The Old English Sheep Dog is considered a native breed of Britain, although its ancestors are believed to include a Russian breed called Ostchar. Other breeds that may have contributed to the line, include the Bearded Collie and the Briard. 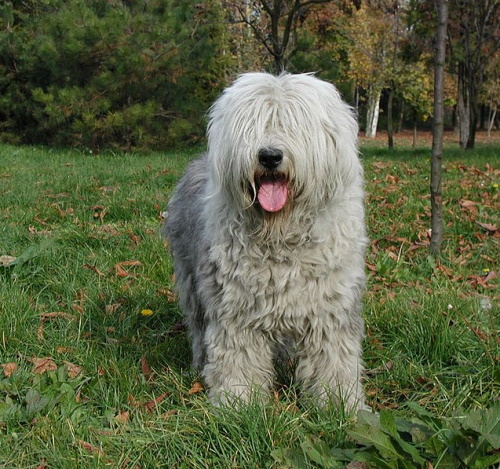 Can You See Me Now?

His history can be traced to the mid-1700's and his usefullness as a working dog is stellar. He was developed by farmers in southwestern England and mainly bred for driving and guarding livestock, but he also proved his worth in flushing and retrieving game, rounding up lost sheep, and even pulling sleds.

Underneath the shaggy coat of the Old English is a strong, sturdy and muscular body that is capable of impressive stamina. His rather large head, heavy and wide chest are supported by thick short legs.

If you could see his eyes beneath the hair in front of them, they would be brown, blue or one of each.

And, as far as I'm concerned, unless an owner is planning to show their dog, I would give him a better view of the world by cutting his bangs!

The Old English Sheep Dog is also known by the name Bobtail. This came about during the 18th century when their tails were docked to identify them as herding dogs and thereby allow the farmer to claim a tax exemption for them as a working dog.

At one time hair trimmed from their coat was used to make clothing.

Over the years, the Old English has become a darling of the entertainment and advertising industry.

Some may recall his appearance in the TV show Please Don't Eat The Daisies and Sesame Street, and in the movies, The Shaggy Dog, Disney's The Little Mermaid, Digby, The Biggest Dog In The World, Chitty Chitty Bang Bang and Serpico, to name just a few.

In the advertising world, the OES became a very well know mascot associated with Dulux paint. 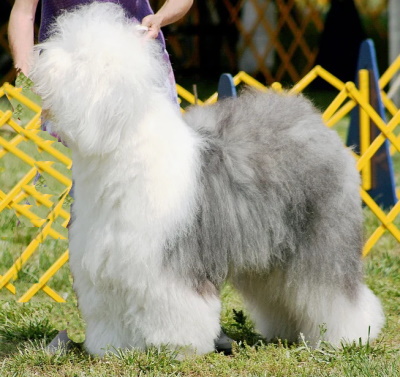 In general, this dog is very sociable, has tons of personality, and makes an excellent family companion. However, it has been noted that some of these dogs can deviate from the norm and not live up to their cuddly expectations.

Experts in the field, advise the importance of buying an OES only from responsible breeders and to know what to ask them before you buy.

The Old English Sheep Dog is considered to be an intelligent dog, but like most herding breeds has a degree of independence which may show up from time to time. This will most often be seen during training when the OES thinks he has a better way to do things!

The herding instincts have remained fairly strong in this breed and you may find yourself, or your children being rounded up by a nip or two, to the ankles.

That being said, consistent gentle training will usually win out over time to correct undesirable traits, if you have acquired your dog from a reliable source.

The OES has what is called a "soft mouth" in dog language and takes well to being trained in retrieving.

Overall, owners report that Old English Sheepdogs are loving, friendly, adaptable and have a mellow disposition. They also are quite effective as watchdogs, though not aggressive.

Height: 21-22 inches or more.
Ideal standard weight: 66 pounds or more
Coat colors: Any shade of gray, grizzle, blue or blue merle with or without white markings. Puppies are black and white until they shed their puppy coat.

The Old English Sheep Dog has a very profuse double coat that is weatherproof. The outer coat is harsh, while the under coat is very down-like and dense. The coat provides good insulation against the elements, keeping him comfortable in cold weather.

In the warmth of summer, the coat can be trimmed back, but not shaved. And as is true of all dogs - the OES being no exception, they need plenty of water and shade when they are outside in the summer.

Owners should plan to spend a good deal of time grooming the OES. The undercoat is very prone to matting and tangling and requires diligent attention to avoid serious problems and skin conditions.

A thorough brushing, which should start at the very base of the hair, is needed a few times a week. Areas needing special attention are between the paws and behind the ears. It is seasonally a heavy shedder. An extremely helpful tool, praised by dog owners as invaluable is the FURminator deShedding Tool an excellent year-round grooming aid for removing dead and loose hair.

The Old English Sheepdog In Movies

How Active is the Breed?

And, since the Old English Sheep Dog loves to play, some of that exercise can be had playing games with him, or he could be your jogging buddy if you are so inclined.

This breed is not fussy about accommodations and can adapt to house, condo or apartment living, providing regular walks are given.

Ideally, a yard is always nice to have for a pet to get some fresh air and a quick romp.

The Old English Sheep Dog is generally very good with children and other pets. He is playful and loving with well-behaved children who are respectful of dogs. One consideration however, is its size and boisterous behavior especially during the puppy years, which could be hazardous to a small child.

Some trainers also report that the Old English Sheep Dog can be unpredictable, which underscores the best policy of always having an adult supervise activities between pets and children.

These dogs love companionship making them a good candidate for the 'not frail' senior person, especially if an older more mellower Old English can be found.

Some things to consider before deciding would be grooming and exercise, because every dog needs both of these.

Calling all OES owners and breeders. We know you're out there and we want to hear from you!

Please brag about your dog and share his/her pictures here and we'll add it to the website for all to enjoy. Read some of the other bragging stories for inspiration. 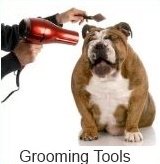