The Irish Setter dog breed was developed in the early 18th century, though their roots can be traced back as far as the 15th century. They are believed to be a cross between pointers, setters and spaniels and have the abilities of all these breeds. 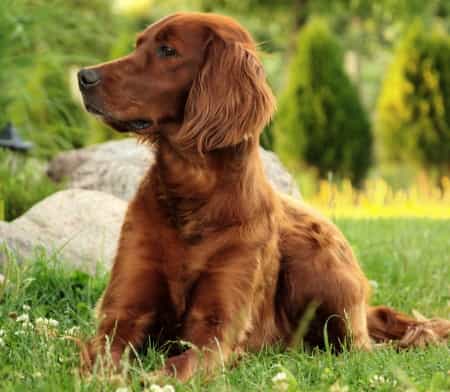 There is no denying the striking beauty of this breed. Two presidents were owners of Irish Setter dogs - Harry Truman and Richard Nixon, as well as other celebrities which caused an upsurge in their popularity during those times.

Early on in their development, they were trained to accompany Irish sportsmen in finding game birds.

They did this rather well and had a unique way of indicating to the hunter that they had located the quarry - by lying down.

The Irish Setter dog breed is noted for its fun loving and affectionate nature. They are intelligence dogs with a bit of independence in their bones.

Because of the need for a substantial amount of exercise, training for field trials is an ideal way to spark the breed's interest and take advantage of their natural abilities.

This in turn can be a help in building cooperation for other forms of training, which is more successfully done when using a loving, yet firm and consistent approach.

As family companions, Irish Setter dogs are amusing and mischievous, love company and get along well with other dogs. They are very people oriented and don't like being left alone. Behavior problems may result if they are left too often or for long periods.

Although not of guarding instincts, this breed is alert and will sound the arrival of any visitors to your home and would also be protective if necessary. 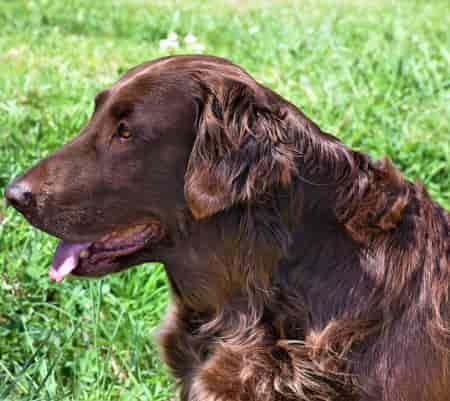 The Irish Setter has a silky coat that is mostly of medium length except for the forelegs and head where it is shorter. It has significant feathering around the ears, chest, tail, undercarriage and legs.

Daily brushing is needed to keep this beautiful coat in good condition, free of mats and to control seasonal shedding.

You'll be way ahead of the game if you get a high quality brush that won't damage the coat and will make brushing easier on your pet and you. This steel buttercomb is an excellent finishing companion to the brush.

Excess hair around the ears should be trimmed for air circulation which will help prevent the tendency for ear infections.

How Active Is The Irish Setter?

Many owners have fallen for the panache and handsome appearance of the Irish Setter dog breed without considering if they can match the activity level of the breed, which is a top consideration in owning one successfully.

To be well adjusted, the Irish Setter needs a lot of exercise. Without it, he will become restless and high strung and will not be an enjoyable pet.

An active family is perfect for this breed. He makes an ideal and willing buddy for running or jogging, if you are so inclined.

Otherwise, daily long walks and an opportunity to play in a fenced yard will meet his needs.

The Irish does best in a rural setting with plenty of space to stretch his long legs and play.

Secure fencing is recommended as he will tend to roam out of his territory if unrestricted.

And strangely enough, even though he has a good nose - he won't necessarily find his way home!

Apartment style living is definitely not his bag!

Being loving and affectionate, this breed has an excellent reputation with children who can keep up with his playful energy.

Small children might be a bit overwhelmed so adult supervision is always recommended in these interactions as would be the case with any breed of dog.

Due to the exercise requirements, the Irish Setter dog breed would not be the best choice of companion for less active seniors or sedentary families.

That being said, some seniors are very active or there is someone else available to consistently meet the daily exercise needs. In this case the breed could be a consideration. 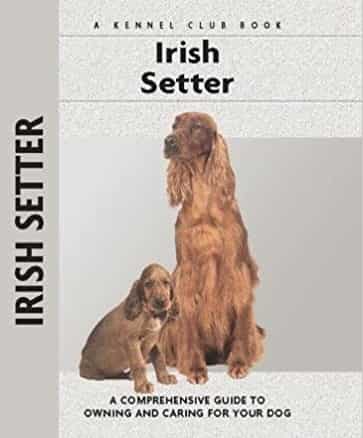