English Toy Spaniels were greatly admired by Mary Queen of Scots and one such loyal companion was said to be found hidden in her clothing on the day of her execution.

This spaniel belongs to a breed line which includes four separate types of spaniel. It was developed around the time of King Charles II, in the 17th century, though it is speculated that it has some prior roots in Asia. 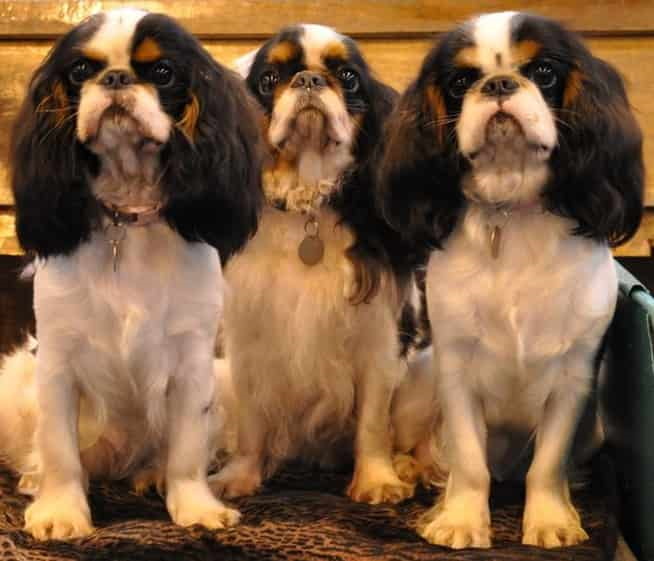 These miniature spaniels are known in England by the single name of King Charles Spaniels and were named for the king who was a fervent admirer of the breed and who owned many of them.

In fact he was so fond of these spaniels as companions, that he passed a law that they should be allowed to enter any public place and also that no transit tax should apply to them.

Subsequently, the English Toy Spaniels, along with other similar toy spaniels, were given a "nose Job" by crossbreeding with the Pug dog. The desired goal being a smaller shorter nose, was successful.

But the tinkering didn't end there, ultimately breeders tried to restore the original look of the spaniel that was so admired by King Charles. These attempts led to the emergence of the Cavalier King Charles Spaniel which (probably to their relief) turned out to be a very handsome larger dog, albeit with a larger nose!

Originally toy dog breeds were just very small dogs occurring in a litter of regular size dogs. Eventually, these little variations became sought after. Breeders seeing the value of this, began selectively breeding to produce the small, compact and sturdy toy dogs that you see today.

The English Toy Spaniel is a compact little dog. His furnishings are full with a good amount of feathering throughout the coat. He has rather large kindly eyes, a short muzzle with slightly undershot bite and a more pug-like nose than some other spaniels.

The coat is long, straight and silky and that combination is a recipe for tangles! To avoid them, keep him away from bushes during walks and brush his coat often. Good brushes to use are this one along with this slicker brush. Both are made by Whal, one of the top brands in grooming tools.

Shedding is about average for this breed and can be kept under control with a shedding blade.

The English Toy Spaniel can best be described as a very affectionate companion dog that doesn't like being left alone.

He is a natural lap dog, very devoted to owners and quite playful.

This breed has good intelligence, adapts to any environment and is easily trained in house rules.

The English Spaniel doesn't bark a lot, but can make a respectable watchdog!

Overall English Toy Spaniels are mostly healthy small dogs, they are prone to hereditary eye problems such as:

Other conditions related to the breed include:

Like most short muzzled dogs, they may also have respiratory issues and low heat tolerance.

Collapsed Trachea is another condition to be aware of that is most frequently associated with small dog breeds.

To help avoid this condition, vets often recommend using a small dog harness instead of a collar, as this will take pressure off of the trachea.

Because of their prominent eyes and long hanging ears, these areas especially need to be kept clean to avoid infections and ear mites. 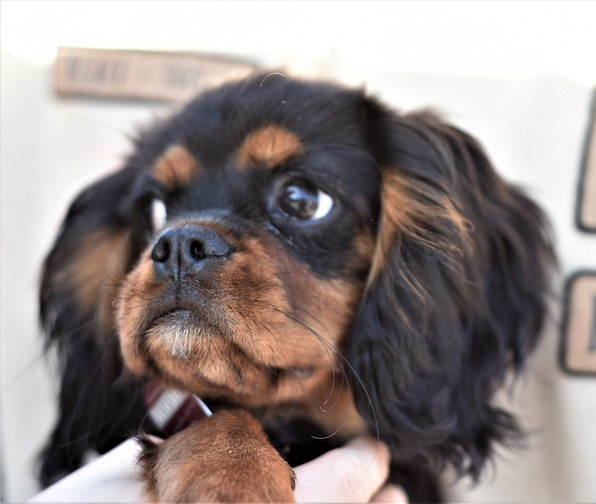 How Active is this Spaniel?

These toy spaniels are quite vigorous when playing outside. Inside the home they tend to be more quiet and are very happy to be curled up beside you.

While the exercise needs are moderate, don't overlook this part of his care. The ETS is no different than other pets in needing the health benefits of a daily walk, plus the mental stimulation it provides to keep them young!

Does well in small homes or apartments - doesn't really need a yard, although it is always an advantage for play, training and other obvious reasons.

Suitability As Pets For Children?

English Toy Spaniels are quite fragile and do better if not around small or very young children.

However, children who are old enough to be considerate and gentle would definitely enjoy this playful companion.

Considering the modest exercise requirements and gentle nature of this spaniel, it is an excellent choice of dog for the seniors, empty nesters or just the more sedentary family.

They are also quite alert to potential intruders.