Basset Hound Dogs - Slow and Easy
But They Get The Job Done!

No one can mistake the Basset Hound dogs with their woeful expression and placid demeanor. I think the term laid back was coined with this dog in mind.

It's hard to imagine this breed originating from a hunting background unless you know about their amazing scenting abilities which are second only to the Bloodhound.

Directly related to the French bassets and later imported and developed further in the UK, these scent hounds were favored by both British and French royalty.

Bassets hunt in a pack and have been used to trail deer, as well as smaller game, including hares and pheasants.

With their short legs they are not too speedy, but they make up for this with tenacity and excellent stamina.

Over the years, the Basset's appeal brought them a dose of fame in television and advertising.  TV shows in which they appeared included  Columbo, The People's Choice, The Dukes of Hazzard, and Coach.

Yet another Basset named Sherlock appeared on the Steve Allen show alongside Elvis Presley singing to him his popular "Hound Dog" song.

In recent years, the Basset Hound's intelligence and entertaining nature has brought a great following and popularity as family pets.

The coat is short, smooth, and dense. Shedding is very heavy, but a de-shedding brush such as this one from Pet Neat will keep it controlled.

Due to the Basset's low slung body, his coat and ears do tend to pick up the dirt. Regular brushing with a bristle brush is ideal to remove debris as well as bathing on an "as needed" basis.

Special attention to weekly ear cleaning is a must because Basset's ears are generally warm and moist inside - just the conditions for bacteria, yeast or ear mites to flourish.

A gentle and natural ear cleaner without the sting of alcohol will make the cleaning process easier and one your dog won't shy away from. Ear infections are no fun for a pet, preventative maintenance is the best way to avoid them.

An interesting side note is that the Basset Hound's long ears were developed so as to disturb the dirt and lift the scent, as they followed the trail of their prey.

This is a very affectionate, loyal, warm-hearted and charming dog with great appeal. They are known for their brave and protective characteristics and are considered good watchdogs.

The Basset is an intelligent dog, but considered a bit difficult to house train. This breed is not quite as fussy as other dogs about his crate and may not be too bothered if he soils in it.

Owners should expect to be patient, consistent and use a gentle approach. But, the good news is that once housetrained, Basset Hound dogs are unlikely to forget their training.

Basset hounds like to be around their people and get anxious if left alone too long which may result in a spate of howling and even bad behaviors.

On the topic of howling, this is a trade-off when considering this loveable breed for a family pet, as is snoring! 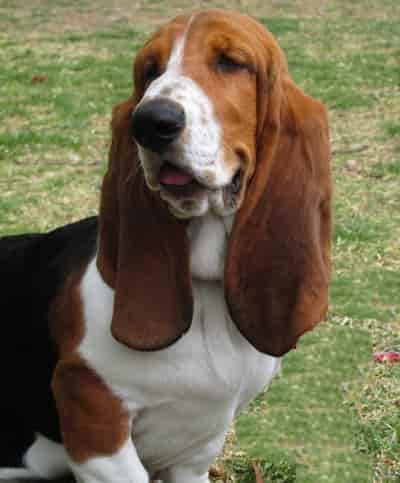 Basset Hound dogs are subject to the following potential health conditions during their lifetime:

Because some of these health issues are genetic, a responsible breeder will conduct these tests on a puppy's parents and have the results available to potential buyers:

How Active is the Basset Hound?

As a family pet, the Basset Hound's exercise needs are moderate, but unless you have them involved in outdoor field activities, they do need to get a daily walk at a minimum for physical health and mental stimulation, just like all dogs.

And even though they will readily accept a sedentary lifestyle, this breed has a tendency to become fat and 'heavens' even lazy, so keep an eye on their waistline!

Basset Hound dogs will do fine in either an apartment or house, as long as there is an outside area for exercise and play.

A Good Breed For Children?

A good family dog. The get along well with children of any age and enjoy playing with them. They are also affectionate and protective.

That being said, do make sure an adult is around whenever children are playing with pets.

Basset Hound dogs are an excellent dog breed for the elderly due to their mellow disposition as long as someone is able to meet their exercise needs.

To clarify further, exercise means a daily 30-minute proper walk (not a stroll).