The American Water Spaniel dog, as the name implies, is a water dog and considered an excellent and versatile hunter, being capable of flushing and retrieving and working both on the ground as well as retrieving from boats. 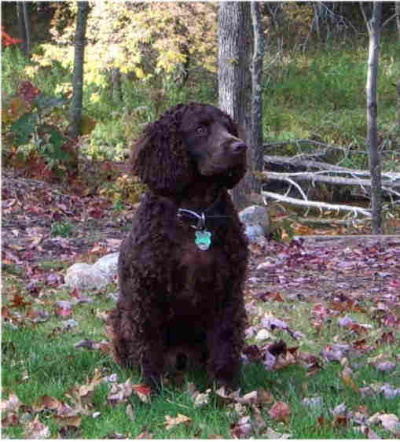 The AWS is an "all American" canine having been developed in the mid-western United States and more specifically rooted to Wisconsin.

Subsequently it became the state dog of Wisconsin in 1985 and is considered a quite rare dog breed.

The development of the breed is subject to speculation, but based on its physical appearance, many authorities have concluded that various water spaniels, including the Irish and Old English water spaniels, as well as the Curly Coated Retriever, are likely contributors to its lineage.

The American Water Spaniel dog is classified along with other spaniels, retrievers, setters etc., in the sporting dog breeds category, but he is second to none in his hunting abilities within this group!

He has a friendly and loyal disposition and being very people-oriented he makes an excellent family companion, as well as an alert watchdog.

This AWS is known for his high intelligence and is considered to be very trainable. Although he is an enthusiastic learner, his temperament is rather sensitive and he won't respond well to anything approaching harshness.

Training will go a lot more smoothly if carried out with a gentle hand.

Early socialization is also very desirable and helpful in encouraging a well-balanced demeanor and to diffuse any tendency toward timid or aggressive behavior.

He has been seen and known to do well in competitive hunting trials at dog shows.

If the American Water Spaniel dog receives a nutritious diet and good care, most can be expected to live up to 13 years or even 14 years without a lot of health problems.

However, there are some health conditions associated with the breed to keep in mind. Among them are diseases suspected of being inherited that relate to the eyes such as PRA (progressive retinal atrophy) and cataracts. Prospective owners would most likely want to ask breeders if tests have been done to screen the parents for these conditions.

Some other issues that may affect the AWS include:

Hip dysplasia - common in many breeds, is a relatively lower concern in the AWS. However the national breed club does recommend screening for this along with eye disorders, and cardiac abnormalities, carried out in line with OFA and CERF protocols.

The American Water Spaniel dog is medium sized, attractive and sturdy. He has a dense double coat, fully furnished long ears and a longish tail that tends toward feathery.

The coat will be either densely curled or wavy and is seen in various rich shades of brown.

The coarse outer layer of the coat is both waterproof and protective against rough terrain. Warmth is provided by the inner layer. It has an oily texture and can be either wavy or very curly and is quite dense.

Maintenance consists of a thorough brushing about two or three times a week. Shedding is moderate.

High quality brushes will make grooming easier on your AWS and you!  To glide through the coat with ease, try this fusion brush. To remove dead hair and debris from the undercoat, this slicker brush will get the job done.

Lastly have a good comb in your arsenal as well as a pet dremel or clippers for grinding or clipping the nails.

How Active is the Water Spaniel?

The American Water Spaniel dog, like most sporting breeds, has inherited a strong desire to be active.  There are many competitive canine events, some of which you can participate and enjoy with your spaniel. They include:

These events are great opportunities to exercise and mentally fulfill your dog's needs as well as to have fun with him.

The AWS deserves to be exercised on a regular basis, and if this can include an opportunity to swim, he will be even more delighted.

In return, owners will get to enjoy a more contented companion!

The AWS is not fussy about accommodations as long as he has frequent opportunities for exercise.

Being of a modest size he can do well in an apartment, although a yard is always a plus for play time, training or additional exercise.

The American Water Spaniel dog loves attention and has a good reputation being with children.

Looking into a rescue may be an ideal way to introduce children to the breed and judge how well they interact.

The caution remains that interaction between dogs and children should always be supervised by an adult.

This breed is very loyal and would make a good companion for active seniors or less active families as long as adequate exercise can be provided.


A book designed for training the hunting spaniel, which  takes into account that Spaniels differ in temperament from Labrador Retrievers and require gentler techniques to train them. Achieve amazing results with your pup through positive reinforcement and clicker training.  You and your puppy progress at your own rate. Find everything from puppy kindergarten to the conditioned retrieve.


This book is devoted to the spaniel breeds that are classified as sporting dogs by the AKC. Includes information regarding appearance and personality traits, grooming and exercise requirements, hunting ability, aptitude for training. Also covers medical conditions and preventive health care, as well as sports for spaniels.