As the name implies, American Foxhounds were developed to hunt foxes and, as it turns out, they are very efficient in fulfilling this job. 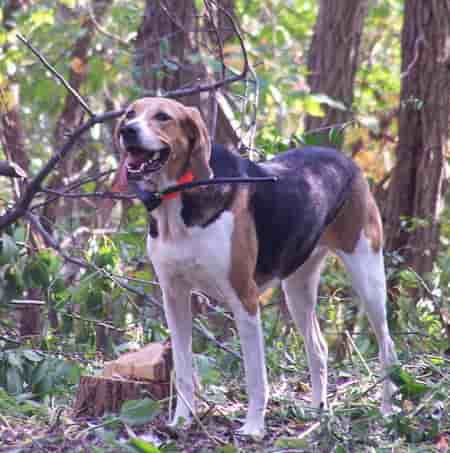 With their great speed and remarkable endurance, they cooperate with each other in packs and use their strong scenting ability to follow the trail of the fox.

The development of American Foxhound dog breed in the United States is largely credited to George Washington and who kept many of them for fox hunting events.

The breed is among the least common breeds in this country and was developed from a base of working hounds that were brought over from England, Ireland and France around 1860.

The American Foxhound became part of the AKC hound dog group in 1886. Today, this breed has the distinction of being the state dog of Virginia.

As would be expected, similarities to the English Foxhound and Beagle can be seen in their appearance.

One interesting fact about them is that they hold a record, with only two other dog breeds, as giving birth to the largest dog litter, which one of them did in 1944. The record number was 23 pups!

Do you like singing? If you answered "yes", you may find the American Foxhound's tendency to bay, quite musical and even enjoy it as many AF owners do!

As a family companion, this breed is very gentle, affectionate and has a very mellow disposition. They have good instincts as a watchdog.

If you enjoy dog shows and want another outlet for their high exercise needs, they can be trained and do well in agility.

The need for a lot of exercise is the most important thing to consider if you are interested in the breed. Training them to compete in active dog sports is a good outlet for their high energy.

A Hunting We Will Go..

Height: 21-25 inches
Weight: 65-75 lbs
Color variations: Any color including red, black and tan, and blue. The Tricolor combination is the one most often seen and the most popular,

This breed has a short-haired coat and is an average year-round shedder. While maintenance is relatively easy, he still needs a weekly brushing session to remove loose hair and dirt.

For this type of smooth coat, two helpful grooming tools are the ZoomGroom or the glove brush along with a boar bristle brush for finishing.

The AF also needs his long, folded-over ears to be inspected and cleaned monthly or more often if needed to avoid ear infections. Use a high quality rinse such as Mystic Ear which is gentle yet effective. Inspect nails routinely for clipping.

American Fox Hounds need exercise - LOTS of it! They love to run and need to be able to do this for extended periods each day. If you are an active runner, this dog will be a great running partner for you.

Ideally, they should have a big yard and alternate ways to exercise. One helpful device for high energy dogs is a pet treadmill.

It would be unfair to have this dog if an owner does not have the time to ensure plenty of vigorous exercise for them.

They are agreeable with other dogs in household, but generally do not like cats.

A dog treadmill can be a good investment for a high energy dog!

The AF is generally a very healthy dog with a lifespan of 10 to 14 years and while not prone to a lot of health issues, it is associated with a few.

Those include ear problems and some reports of hip problems. It has also been noted that there is a slight potential for a platelet disease known as thrombocytopathy.

One thing for owners to watch is the AF's food intake as they do have a tendency to gain weight easily so it's best to only put food out at scheduled times.

Ideal Living Space For The AF?

American Fox Hounds are not well suited to apartments due to their high activity level and vocalness.

Homes with considerable outdoor space will delight this dog, and/or experienced owners who have the time and capacity to give them vigorous workouts.

With this dog's strong inclination to hunt and give chase, property fencing should be very secure.

This breed is regarded to be a good pet around children, having a patient and low-key disposition.

Older more mature children would be a better match to take a more leadership role with the AF's high drive.

That being said, the caution remains no matter what the breed, that activities involving children and pets should always be supervised by an adult.

American Foxhounds are not the best choice for sedentary families or elderly people.

The exception to this would be if they can make solid and regular arrangements to provide the level of activity they need.