Alaskan Malamute Dogs
They're Right At Home In A Winter Wonderland!

Alaskan Malamute dogs are members of the Spitz group of dogs and have existed as both working and companion dogs in the Artic regions for thousands of years. 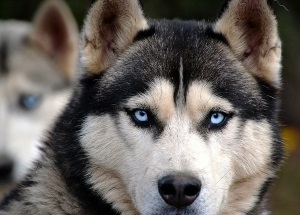 Recent DNA testing has revealed that they are a very ancient breed and possibly the oldest one identified with man.

While some authorities believe they are descended from the wolf, others disagree - citing differences in physical characteristics.

The history of the Alaskan Malamute is strongly associated with the Mahlemuts - people who were part of a nomadic tribe of hunters that migrated with their dogs from Russia - eventually settling down in Western Alaska.

This tends to support the possibility that these Nordic dogs may have existed a very long time before arriving in Alaska!

From that time forward Alaskan Malamute dogs lived and worked alongside the Mahlemuts (who later became known as Eskimos). It was a symbiotic relationship that allowed each to survive. The dogs provided excellent tracking skills which was a valuable asset in locating various game plus a great nose for finding seals under the ice.

On successful hunting trips, their strength enabled them to pull the loaded sleds back to camp where they were given a share of the food while enjoying mutual companionship and serving as guardians of the campsite.

This breed was recognized by the American Kennel Club in 1935 as part of the working dog breeds and was later designated as the state dog of Alaska in 2010.

Because of their numerous abilities and endurance for working in challenging conditions, it should come as no surprise that Alaskan Malamute dogs were later sought out to provide aid to miners during the Klondike Gold Rush.

Further attributes go to this breed for their contributions on polar expeditions. AND, I'm not finished yet, they also received recognition during WW II, during which time they assisted with search and rescue efforts as well as transportation.

When you first see an Alaskan Malamute dog, you'll quite likely recognize some typical Nordic dog features, such as his well-muscled and powerful appearance, lavishly abundant coat flowing through to a thick curled tail, and a large head with prominent muzzle.

Some think this latter feature conveys a wolf-like similarity, but on closer inspection, most think the Mal has a softer more affectionate expression.

In other respects, the Mal looks like just what you would expect in a dog that had to do such rugged work - very solid! He's also a very handsome and quite large canine. Here are the physical stats: 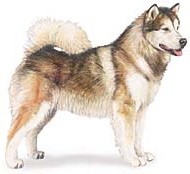 Height of Alaskan Malamute dogs ranges from 22 to 26 inches.
Weight range is from 75 to 85 pounds.

The Malamute has a thick weatherproof double coat of variable length around its body. The outer guard coat is coarse while the undercoat is dense, woolly in texture and up to two inches in length.

Colors range from light gray progressing to black, sable and from gold through shades of red to liver. These colors are seen along with certain white markings. White is the only solid color allowed in the AKC standard.

While this breed is one of the more naturally clean types and pretty much odor free, if it is not living in its native cold habitat, it will need some grooming attention. Fortunately, the Mal has a coat that is not prone to forming mats, so a good brushing a couple of times a week should suffice and bathing only if necessary so as not to strip the natural protective oils.

That being said, these dogs are shedders and particularly heavy shedders at certain times of the year. We recommend the FURminator - a tool that does a spectacular job of keeping the fallout controlled and out of your house when dogs are shedding a lot.

In addition to coat care, nails should be checked for necessary clipping, plus it is a good idea to give your dog a weekly overall pet checkup - you can find out how to do that here.

Health Profile of the Malamute

Like so many dog breeds, hip dysplasia is the most prominent health concern with the Mal. The breed also is affected by other joint problems such as:

While hip dysplasia is a top health problem, cancer is the number one cause of deaths in the breed - particularly osteosarcoma, mammary cancer and lymphosarcoma.

This breed has also encountered occular problems such as cataracts at different stages in its development both at a very young age and around mid life. With respect to eye disease, owners should also be on the lookout for PRA, glaucoma, entropion and corneal dystrophy which may crop up.

Other health issues that may affect the breed include a certain type of hemophilia, epilepsy, myasthenia gravis, diabetes and skin disorders.

Some of these diseases are genetic so careful dog selection is important when acquiring a puppy. Other issues may be avoided during the Mal's lifetime by providing good health care and nutrition.

While it has been reported that the Malamute has developed a very efficient digestive system and may generally do very well on a smaller intake of food that would be envisioned based on its size, it can also be prone to bloat by too rapid a consumption of its food.

With good care Alaskan Malamute dogs may live up to twelve years, though the average is closer to ten and a half years.

A lot of the same adjectives have been used to describe Alaskan Malamute dogs over and again. Two of the most prominent ones are affectionate and friendly, followed closely by loyal and devoted. In fact the sum of these attributes equals a dog that loves humans and is more than willing to please to get your attention.

With these good traits working in your favor, training should not be a problem even in a breed often portrayed as a bit on the independent side and a tad stubborn!

With dogs as powerful as an Alaskan Malamutes, it's very important that owners be in control and are seen by their dog as confident pack leaders.

This means being firm and consistent in your training method - while remaining fair and kind. It is also highly recommended that puppies be enrolled in puppy school in tandem with early socialization.

Alaskan Malamute dogs are usually considered mostly quiet and dignified dogs around the home, but they also have a very playful side and certainly enjoy affectionate attention. This breed tends to remain puppyish throughout its life.

Because they are by nature a working dog, they will love it if you find them a job to do.

Alaskan Malamute dogs are intelligent and versatile and have proven to do well in the areas of agility, obedience, sledding and therapy services.

Alaskan Malamute dogs need a fair amount of daily exercise. If you happen to be a hiking enthusiast and live in a colder climate, this is an ideal way to provide for their needs in a way they will really enjoy.

On the flip side, although they can live in warmer areas, they do not tolerate heat well and care should be taken during warmer weather to make sure they are not overstressed or become dehydrated.

In this instance, exercising them in the cooler part of the day is the wisest choice.

While this breed loves to be around his family pack, he also loves to get outside so a house with some fenced acreage would be the ideal.

Second best would be a spacious house with access to a sizable back yard which should be securely fenced because they are skilled diggers!

When it comes to the best environment for the Malamute, as mentioned previously, this dog will be much more comfortable living in a cooler climate.

However, he does tend to develop a lighter summer coat and with adequate shade and water he can do okay for short periods in warmer areas. In any event, air-conditioned homes are this dog's best friend!

Apartment living is not for this breed that enjoys a lot of space and that is pretty active both in and out.

Does the Mal Enjoy Children?

Mals have a good reputation with children. That being said, it is important the Malamute be well-socialized to being around children - preferably before children are a part of the family.

On the flip side, children must be taught how to properly interact with dogs especially when it comes to large dogs. Young/small children, unless adequately instructed, can often behave in ways that test any pet's tolerance or might even accidentally injure a pet.

It also bears keeping in mind that the Mal can be very boisterous at times and could accidentally knock over a small child while playing a game.

Maybe the reason Alaskan Malamute dogs are ideally suited to therapy services is because they are so strongly pack animals and thoroughly know how to cooperate in groups.

One thing for sure is that they are known for their gentleness and affection for the both the elderly and the young especially those dealing with illness or needing assistance.

As far as being an in the home companion, this would be too challenging for a senior because of the exercise requirements as well as the Mal needing to have a strong and experienced leader. 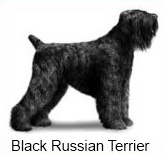 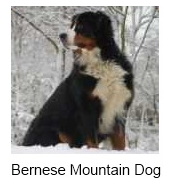 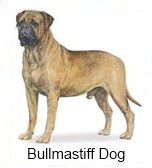