The Toy Poodle dog breed has a well-deserved reputation for high intelligence. In other words, he's very smart and can be easily trained - in fact some owners claim poodles just about train themselves! 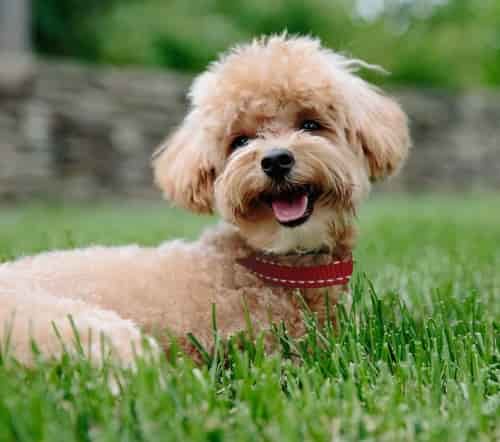 Poodles like to be talked to, actively listen, and seem to understand words better than other breeds which is a distinct advantage when teaching them new commands.

If you're into competition, this breed does well in obedience and agility. In fact, it would be a shame not to develop these natural abilities.

Poodle dogs are sensitive, very loyal and loving pets who really enjoy being in close contact with their families. They also are quite protective, though not aggressive and have strong instincts for being a watchdog.

Clever, entertaining and quick to mimic, this breed has been well known over several centuries for its role performing in circuses.

Over time, the toy poodle dog has been bred down to an even smaller size, often referred to as the teacup. However, health problems have been noted in these wee ones so that is something to consider if you're interested in having one. 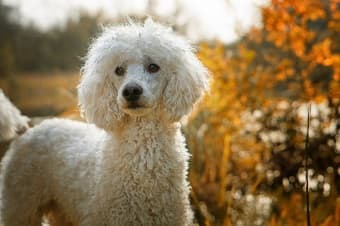 The Toy Poodle dog was originally developed as a sporting dog that could be useful in both water and in hunting over land. Throughout the breed's history they have been one of the most popular dogs around the world.

Although the poodle is considered the national dog of France, its development, according to reliable sources, originated in Germany where it was known as Pudel and was involved in water sports and as a serious working dog.

At that time it was a much larger dog. Interestingly, both the toy and miniature poodles have some background as truffle hunting dogs in England.

It wasn't until its appearance in France that it was bred down to the toy-sized and miniature poodles we see today. During the 18th century the breed became a favored companion pet among the aristocracy.

Delving even further back into this breed's origins, evidence shows that the poodle, or a very similar dog, was around during the 13th century. To back this up, their likeness has been found in portraits and artifacts of that time period.

This toy dog breed is very dainty and elegant in its appearance. The curly coat is most often seen in the "lion clip" which originated to facilitate swimming and subsequently became the most popular look. Another interesting fact is that the Toy Poodle dog has webbed feet - a physical characteristic that no doubt contributes to its natural swimming ability. 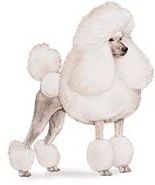 Miniature poodles and Standard poodles are both larger than the toy and are classified under the non-sporting group of dogs.

The single curly coat of the toy poodle is inherited from its larger ancestors who were protected by it when retrieving water fowl.

It is understandably quite full and grows quickly. A coat such as this is a magnet for mats and tangles. See our guest article on how to undo your dog's tangles for tips on this snarly problem.

Daily brushing and combing will help smooth out any tangled spots before they become more serious matters and need cutting out! You can easily do this while brushing out the loose hair which tends to build up in this type of coat.

I personally have a dog with a similar coat and find the slicker brush works well along with a comb and some brushing spray for handling individual sections. Tip; Avoid the cheap slicker brushes as the pins will irritate your dog's skin. The best ones have smooth bendable pins that are much more effective and kinder to your pet. A good comb to use daily and after a bath is this one.

In addition to home care, regular and fairly frequent professional clipping would be needed if you want to maintain a traditional look. For non-show dogs, an easier care short clip may be preferred. While shedding is little to almost none, and is helpful for allergy sufferers, it does mean that the build up of loose hair does need to be brushed out as previously mentioned.

Most common health issues of the Toy Poodle dog breed include;

Some of these issues are inherited disorders, while others are connected with their fragility.

Activity Level of the Toy Poodle

The Toy Poodle dog breed is much like other active dogs which means that they do need to be taken out for walks on a regular basis, but it doesn't need to be an extreme amount of exercise.

Since the Toy Poodle dog breed is quite energetic and playful, if you have a fenced outdoor area, they will enjoy being able to run off a lot of their natural energy.

On the other hand, because the toy poodle is quite intelligent, he needs both mental and physical stimulation to stay healthy.

Getting out fulfills a large amount of this important need as does training and socialization.

While poodles do well as indoor companions, a fenced yard or other safe outdoor area is a real plus especially if regular walks aren't always possible.

The Toy Poodle With Children?

The Toy Poodle dog does best in families with older children who are considerate and careful with pets - particularly pets that are fragile - such as this one.

Like many very small dogs, the poodle is rather skittish around little children and tends to avoid them if they can.

Whichever breed you choose for your family, please make sure an adult always supervises activities involving children and pets because even the most reliable breeds can be unpredictable.

The Toy Poodle dog breed, because of its strong affection for family and close bonding, makes an excellent companion for the elderly or more sedentary family.

The low exercise demand is also a favorable consideration.