Pomeranian care is not that much different than caring for any other small dog breed, except that grooming is on the high end and requires quite a bit of dedication to keep this lovely dog looking good. Coat care will always be a big component of their needs. 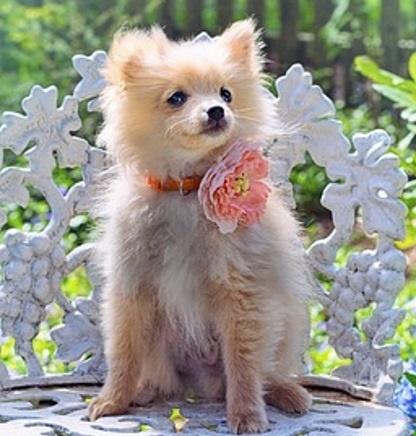 If that doesn't scare you off, let me switch gears for a moment to give your some background and visual information about the Pom so you'll have a better feeling for the breed before we move on to the Pomeranian's care on a daily basis.

Here are quick links to other sections of Pomeranian care on this page:


Background Of The Pomeranian

The Toy Pomeranian is a vivacious and somewhat foxy-looking little dog with a very full coat that is full of personality and is often seen as a participant in dog shows. Its facial features are well defined, with very alert expression and the head is framed by a bushy collar.

While it may be hard to imagine, Pomeranian dogs originally came from herding and sled pulling ancestors - among them the German Spitzen, Keeshond, Samoyed, Norwegian Elkhound, and Chow Chow.

The influence of the Pom's ancestors can still be seen in the appearance of the breed today - except for its size. All the dogs selected for their development, were much larger, as were Pomeranians at that time. The breeding down in size began in Pomerania and continued in England, from a previous weight of around 27-28 pounds, to its present day petite size somewhere between 3 to 7 pounds. 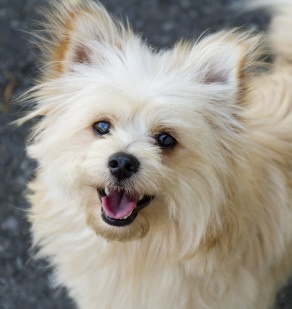 In the late 1800's Queen Victoria took such a great liking to the Pomeranian dog breed that she established a kennel to begin breeding them.

Some of the dogs from the Queen's kennels did very well in the famous Crufts Dog show, which made them a popular dog in Britain during this period.

It also influenced breeders to develop dogs of the much smaller size.

There are many, many other past famous owners of the Pom, too numerous to mention, but among them are Harry Houdini, Jean Harlow, Charles Darwin and Elvis.

And this little dog has some fame of his own to brag about for being awarded "Best In Show" at the well-know Westminster Dog Show in 1988.

Outside of the dow show arena, it is not surprising that the Pom has also been in the limelight for appearances in a number of movies, television programs and advertising media.

Recognition of the breed by the UK Kennel club happened in 1870, after which three Poms were entered into their first show. The AKC accepted the Pom in 1900, under the toy group classification. During that same year the American Pomeranian club was established, but it wasn't until 1910 that the breed was officially presented in a show. 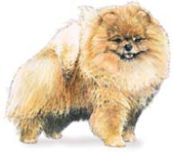 Pomeranian care, not surprisingly, involves quite a bit of grooming. The Toy Pomeranian is a double-coated dog. The outer coat is very full, straight and harsh in texture, while the undercoat is soft and fluffy as is the tail, which is carried jauntily high.

While their coat is a major attraction of the breed, insufficient grooming of it can quickly lead to mats and tangles - argh. If these snarls are not dealt with as soon as they appear, you'll be tearing your hair out - I kid you not!

High quality Pin and slickers brushes along with good combs are your friends and the minimum recommended tools you need to maintain this type of coat.

Whatever you do, invest in the best grooming tools you can afford to take care of your Pom's beautiful coat.

One major fact about Pomeranian care to take to heart, is that Poms are constant shedders. If you're not thrilled about dog hair everywhere but still love the Pom, you can opt to step up the grooming routine when shedding is at its heaviest. In any event, to keep the skin and coat in good condition, daily brushing is recommended. By keeping the dead hair removed, you will not only be helping to prevent mats, but also lessen the hair around your home.

On average, every 4-6 weeks, the Pom should have his eyes, ears and nails inspected for cleaning and trimming respectively.

One other very important part of Pomeranian care is dental care because the Pom is more susceptible to losing teeth at an early age. Daily tooth brushing is the ideal if you can manage it. It will help your pet avoid tooth loss, or have to be put under anaesthesia for plaque and tartar removal or gingivitis treatment.

Plaque Off, a food additive, along with an enzymatic toothpaste are good products to use your dental routine.

I use a child's soft toothbrush with my big dog as it's much easier to use than a large clunky dog toothbrush. I alternate with these soft finger brushes which are made of fabric and which make it really easy to feel the teeth. The toothpaste is the key to getting started with brushing as most dogs love the flavor of it. Even so, I also give my dog's teeth a wipe whenever he has just been polishing off a bowl of water and needs to be dried off. Every little bit helps.

A cheerful little dog, affectionate, full of personality, and a wonderful companion that "can" be obedient.

With a history of performing in the circus, it is easy to understand why Poms are considered to be very intelligent and enjoy the spotlight. They have been known to do a very entertaining little dance with their front legs referred to as the Pomeranian patter. Talk about cute!

An important part of Pomeranian Care is to teach your pet the rules early on and establish that you are the boss, or they will surely try to train and dominate you! This smart dog catches on fast, but you still have to allocate the time to its training at the beginning.

Small dogs sometimes develop what is referred to as "small dog syndrome" if they are overly-indulged and not trained. What this means is that they come to believe they are the pack leader and have to run the household! So be forewarned!

On the other hand, if the owner establishes himself as the "top dog", the Pom will no longer fees the need to take charge because it feels safe in the leader's care.

Despite its small size, the Pom is a good watchdog, but can get carried away with barking which is rather high pitched. The solution to this is spend quite a bit of time on the "quiet" command during training. Everyone will appreciate it if he learns this well enough to curb any extreme barking - especially your neighbors!

Then again, while caring for your Pomeranian, it would be hard not to indulge them every once in a while because they are so cuddly and cute and so enjoy being a lap dog.

The health information about the Pomeranian care has been well-researched, but we want to make it clear that we are not vets and it is not intended to replace the advice of your pet's veterinarian.

If you have health questions, you may submit them to an online vet professional through the vet service form below.

With good care Pomeranians can be expected to live between 12 to 16 years which is quite long, but not unusual for small dogs. They reach maturity around one year of age.

While the Pom is generally considered a hardy breed, there is one disease that can be very devastating to owners because it affects their pet's beautiful coat. And that condition is Alopecia X aka Black Skin Disease (BSD). It is called BSD, because the skin where the fur is lost will be black. No exact cause is known for this disease, but it may have a relationship with diet or hormones.

The best thing you can do if you have a Pom with signs of BSD, is to take him to your vet where tests can be run to rule out various causes. In caring for your Pomeranian you'll also want to learn about other potential health issues. When you do this you will be in a better position to help your dog live to his full potential.

While there are many health conditions that can affect any breed, here are some of the ones most associated with the Pomeranian care - they are in no particular order:

Have your vet instruct you on what measures you can take if you see any of these signs, or just take him to the vet right away - it's that important.


One last comment about Pomeranian care concerns his small size and the need take extra precautions to safeguard him from accidental injury.

The Pom does well with minimum exercise as they are generally very active and busy-bodies around the house.

That being said, all dogs need to get out for a daily walk for their mental and physical well-being.

They also like to play, so check out some fun toys for them.

The Pom is not fussy about living conditions so even apartment living is adequate.

The main concern is that they can be annoying barkers if untrained. For the sake of being good neighbors, do teach the Pomeranian to respond to "Quiet".

Pomeranian Care around Children is an important consideration.

while Poms are excellent house dogs, they are generally not at ease around very small children. Accidental injury, such as being stepped on, can occur so quickly between a toddling toddler and this very small toy dog.

That being said, children who are closer to teenage years and know how to be considerate with pets, would be a much better match.

Poms and the Elderly This is a good choice for seniors because they are cheerful, like to be spoiled, and have great appeal to people who generally don't have little dogs for pets.

As long as they are able to provide the care a Pomeranian needs, they are known to make good friends with the elderly and are both affectionate companions, brave watchdogs and don't require a lot of outdoor exercise.

FYI: A good place to find a Pom in need of a good home:  Pomeranian Rescue