The Otterhound is considered a somewhat rare breed - there being only around a thousand of them in the world. 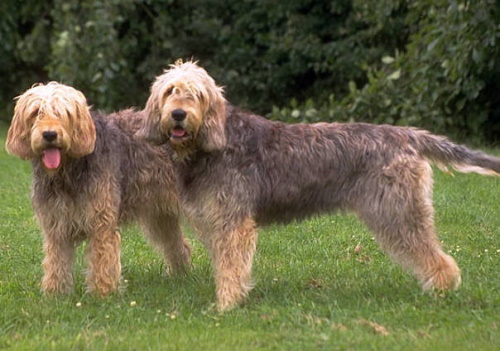 Other dog breeds believed to have played a part during its development include the Bloodhound, Southern Hound, certain French hounds and also the Water Spaniel, though his ancestry is not absolutely clear.

Subsequently the Otterhound breed itself became a contributor, along with other terriers, in the development of the Airedale - evidence of which is clearly seen in the coat coloration and physical size.

The reason for this breed's development it pretty obvious - to spend long days in the water hunting otter which it did very well around the 14th century. Originally, otter hunting was conceived as a means of preserving some of the fish population for human consumption, but later on it became more of a sporting activity.

At one point this breeds population became severely depleted due to many being adversely affected by water pollution.

Though Otterhounds are no longer used for hunting otter, they retain the characteristics of a water dog, with a double coat that is water repellent, and webbed feet.

Nowadays the remarkable scenting abilities of this breed, have made it desirable for gundog activities such as trailing after game.

Characteristics of the Otterhound

While being somewhat boisterous and unpredictable, the Otter hound is a devoted pet. It is an amiable and friendly dog, but has an independent streak.

Training needs to be done with patience as it can be a bit on the stubborn side. Owners need to be consistent if they want to establish leadership with this breed.

While it does not have a "hyper" personality, it does have a loud baying call, which it seems to prefer over barking. You're either charmed by his music or not!!

One great attribute of the breed is its loyal and protective nature which makes it not only an ideal family companion but also an effective guard dog.

While the Otterhound generally enjoys quite robust health during its lifespan of 10 to 13 years, there are a couple of more prominent health issues identified with this breed:

Another concern that can be very serious, is an inherited bleeding disorder known as Glanzmann’s thrombasthenia.

Fortunately, DNA testing of a blood sample can now be done to identify this condition enabling breeders to exclude those dogs carrying it from being bred - and in turn, stopping it from being passed along.

Those interested in acquiring Otterhounds would want to see results of such testing before purchasing a puppy.

Epilepsy related seizures are also something to be aware of as they have been known to affect this breed occasionally.

The Otterhound has a shaggy yet attractively pleasing face. However, the thick coat does require quite a bit of care to avoid matting and tangling.

Weekly grooming to include brushing with a slicker brush and comb, teeth cleaning and nail clipping is the recommended minimum.  Bathe when necessary except that the bearded area may need a wash more often.

How Active is the Otterhound?

Energetic - and would you believe it, loves to swim!! If you have handy access to water, this would be the perfect exercise for the Otterhound (and perhaps you too?) Optionally, it can be a good jogging partner.

A significant amount of daily exercise at this level is needed each day to maintain his health and well-being. For mental stimulation, dog sports would ideal and also tap into his above average stamina.

This big and energetic dog should ideally have a lot of space so a fairly large back yard is recommended. For this reason as well as its vocal abilities, it is generally not suited to apartment living.

Because of size, not the best choice for small children, but good with children who are old enough to be considerate of pets and who have had previous exposure to large dogs.

That being said, we always recommend that the best policy is to make sure an adult supervises when pets and children are interacting - no matter what the breed's reputation.

The Otterhound because of their exuberant nature and exercise requirements would tend to make them not the ideal pet for the senior or any family that likes to be more sedentary.