The Japanese Chin dog was previously known at the Japanese Spaniel, but since it bears no relation to a spaniel, its name was later changed. 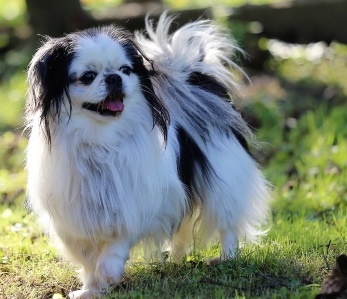 The Chin, as he is often called, is thought to have originated in China, but developed mainly in Japan.

How these toy dog breeds arrived there is a matter of debate, though it is speculated that they may have accompanied Chinese monks who migrated to Japan around the 5th century.

Dogs with a strong likeness to the Chin have been seen depicted in ancient artifacts and embroidery found in China, lending support to the early history of this breed.


The Japanese Chin is considered by many to be a descendant of dogs that were revered pets of the Chinese aristocracy.

They are very ornate and compact in appearance with large eyes and a lot of feathering throughout their substantial coat.

Their expression is both exotic, appealing and a little on the proud side. 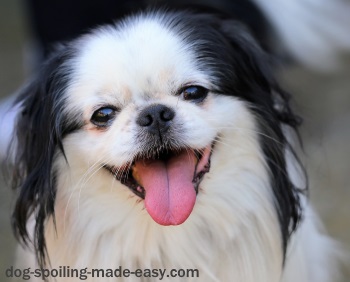 Characteristics of the Japanese Chin Dog

Although the Japanese Chin dog breed seems like the perfect lap dog, it has been known to be a rather good watchdog.

Interestingly, it is one of the quietest dogs and while not a barker, when it does sound the alarm, its bark is surprisingly quite deep and serious sounding.

Another pleasant attribute of the Chin is its high intelligence and trainability. This little dog aims to please and will do well if gentle and consistent training methods are used. They are also clean by nature and considered easy to housebreak.

The Japanese Chin loves to be spoiled! He has a very affectionate nature and makes a loyal and interesting companion, though he is discerning with strangers.

The Chins are playful dogs, happy and good-natured in their demeanor.

When it comes to the health of this breed, respiratory and heart conditions are the most common concerns. Because of the flattened muzzle, they are also more prone to respiratory difficulties and overheating.

The eyes being on the large side and rather prominent are susceptible to scratches as well as more serious eye conditions. Rolled-in eyelids and cataracts are also somewhat common in the breed.

Inherited genetic issues that can affect the Japanese Chin dog include:

The Chin is a very clean dog and has the unusual habit of using its paws - much like a cat - to wash its face.

Having said that, your help is still required for the largest share of grooming!

The Chin has a very full coat that is straight and silky. To prevent matting and maintain its condition, invest in a good quality boar brush because the coat does need regular brushing and combing almost every day.

Shedding for this breed is about average.

How Active is the Chin?

This toy dog breed requires almost no daily exercise if allowed to romp freely around the house.

However, it is recommended that he be taken out for walks because every dog needs to have mental and physical stimulation to maintain good health.

The Chin doesn't need a lot of space and doesn't make a lot of noise which fits in very well with apartment living or any other setting.

The Japanese Chin With Children?

The Chin is a delicate dog and not recommended for active children, but could be a nice pet for a child who is gentle with animals. The Chin does not like rough handling.

As always, the best policy whichever breed of dog you choose, is to have an adult supervise any interaction between children and the household pets.

Grooming needs would be the only variable to consider.