The Harrier dog breed's relatives are reported by some experts to include the Beagle, Bloodhound and the Foxhound. Other sources believe this breed has been developed "only" from Foxhound lines, by selectively breeding down its size. 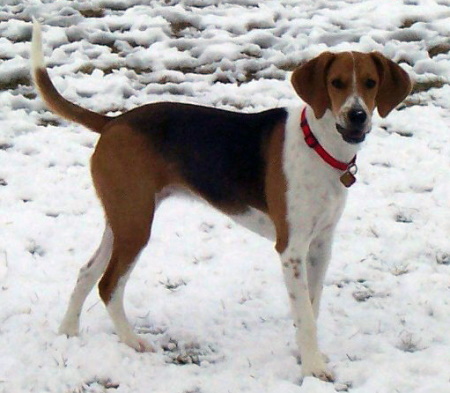 Whatever the case, the first Harriers appeared in the 13th century in the west country of England, though a very similar dog has been written about in much earlier Greek records.

This breed is a sturdy scent hound with exceptional tracking ability. Its name is derived from its skill in hunting Hare and rabbits, although it has also been used to track the fox. It is very bold and possesses extraordinary stamina.

The Harrier has been likened to a smaller version of the English Foxhound and it also bears quite a resemblance to the Beagle. It is a rare breed and one that is considered to be very healthy.

Characteristics of the Harrier Dog Breed

Harriers are an outgoing and cheerful dog breed with a friendly nature similar to its Beagle relatives.

They are noted for their intelligence combined with an inquisitive nature. As such, they are apt to wander off following the trail of anything that gets their attention.

That being the case, it is an important precaution to have a securely fenced yard to keep them safe.

As a family pet, the Harrier is a loving companion that enjoys being around his family pack and may become quite vocal if left alone too long.

Height: 18-22 Inches
Weight: 48-60 lbs.
Color variations: All recognized Hound colors with tri-color being the most common.

The Harrier's coat is short and hard with a glossy appearance. Grooming needs are are easily handled with occasional brushing to remove loose hair. Shedding is about average.

Health Profile of the Harrier

Harriers are considered to be a very healthy dog breed that can live up to 15 years with good care, but the average lifespan would probably be closer to 12.

If you want to get a puppy, it would be important to ask the breeder if the parents were tested and cleared for these orthopedic conditions.

A responsible breeder should be able to explain the testing results and be very forthcoming in providing a certificate to substantiate the tests.

How Active is the Harrier?

This breed is active and should have plenty of opportunity for exercise. They have lots of stamina to run with an owner who likes this type of exercise.

At the very minimum, they should be taken out twice daily for a meaningful walk.

Ideally suited to living in a house with good-sized yard and room for running around. Saving that, a regular exercise routine is recommended.

Can be a barker if left alone too long in cramped conditions such as an apartment. So this is a consideration if neighbors are close by.

Suitable in Families With Children?

Very good with children and gets along fine with other dogs in the home. With non-canine pets, there might be a conflict.

Caution and supervision is recommended with any breed of dog whenever children are interacting with pets.

The Harrier With Seniors?

The Harrier dog breed is very companionable, but his high exercise demands may rule out living with inactive seniors or sedentary families unless arrangements can be made to meet his physical needs.