American Eskimo Dogs - You May Have Seen Them Under The Big Top!

American Eskimo Dogs, are dazzling descendants of the Nordic/Spitz families which includes the Samoyed, white Keeshound, the white Pomeranian, the white German Spitz, and the white Italian Spitz - Volpino Italiano, among others. 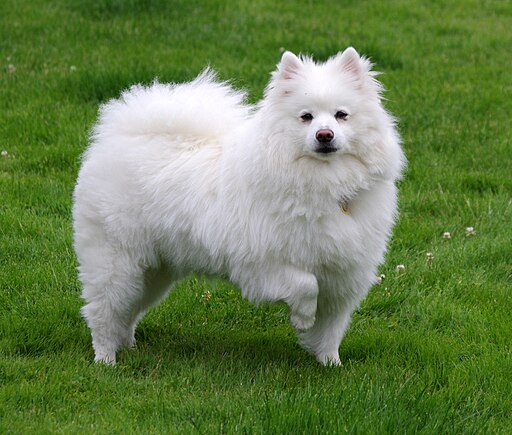 Historically, Spitz type dogs - primarily white coated, arrived in the United States along with the flow of German immigrants during the 19th century and eventually were referred to as American Spitz.

Subsequently as the lines developed within this group, the American Eskimo Dog became a separate breed from its Spitz relatives.

The American Eskimo Dog Club of America was formed in 1985 with the goal of acquiring AKC recognition for the breed. In 1995, this came to fruition when the AKC officially recognized the breed, fulfilling the Club's original intention.

This lively and happy dog has a look of kindness and substance; brown eyes that convey both alertness and intelligence, and a profuse white coat that can only be described as stunning

The Eskie, as he is often called, is a vivacious, acrobatic and agile dog that once enjoyed success as a circus entertainer. In fact one of his ancestors by name of Pierre was a celebrated tightrope walker with Barnum and Bailey Traveling Circus.

Today, they are still easily trained to do tricks and do well in agility competition. As a family companion they can live up to 15 years and are renowned as watchdogs.

American Eskimo Dogs have a loving and friendly temperament that makes them ideal family companions. They are noted for their keen watchdog abilities, while at the same time not being aggressive or threatening.

However, over-zealous barking can occur, but with proper training and socialization early on, this can be modified.

This breed tends to become very tuned into to the moods of their human companions and will respond in kind. Keep this in mind when you are training your AED to be sure you are conveying a "confident" stance!

The Eskie needs to be well-socialized and trained by an experienced owner. They are intelligent, keen and eager to please, but training should be done without harshness.

These dogs respond much faster to training sessions that are short and sweet with a playful bias. Housetraining is usually handled with ease.

Some people have been so taken with the charm and good looks of this dog breed that they rushed to own one without thinking too much about the grooming work, training and socialization responsibilities that are a part of owning one.

As a result, some have been relinquished or abandoned. Fortunately, there is an active American Eskimo rescue group at work to foster these remarkable dogs in need until new homes are found.

This breed has done well in competitive agility trials, obedience and detection work for law enforcement.

American Eskimo Dog breed information from the AKC indicates that this breed is placed in the non-sporting group, but is separated according to size into three divisions:

Dogs exceeding 19 inches or less than 9 inches in height, or those with blue eyes, would be subject to disqualification.

A very profuse double coat consisting of a thick undercoat with longer growth extending to form the straight outer coat. The coat is much thicker around the hind end and rear legs and further adorned by a rich very full tail carried over the back. Likewise the ruff has a thick mane-like appearance.

With a coat of this magnitude, regular brushing is essential to keep it in good order. You'll want to obtain both a pin brush and a slicker brush, along with a wide-and-narrow spaced comb comb like this one Resco Combination Comb.

The comb with its choice of tooth spacing will assist you with easing apart any mats or tangles you encounter. You may also need the assistance of some de-tangling spray.

The pin brush will be used for the majority of the brushing with the slicker being used mainly for those harder to reach areas such as inside the armpits.

You may even want to get a triangular slicker brush for the difficult areas. The main thing is to purchase good quality grooming tools so as not to damage this beautiful coat.

Another excellent tool to have in your arsenal for handling the heavy shedding associated with the breed is the FURminator which countless owners wouldn't be without!

For a thorough description of dealing with mats and tangles in the coat, read the article we wrote for the Spruce Pets here.

Health Profile of the Breed

The first step in acquiring a healthy American Eskimo dog is to locate a responsible breeder. A dedicated professional will test the parent dogs for genetic issues associated with the breed.

Although the Eskie is considered a hardy and generally healthy dog, the following conditions may affect the breed during its lifetime:

American Eskimo dogs, need a good amount of exercise not only to maintain physical and mental health, but also to prevent problems such as hyperactivity.

In addition to long walks, an outdoor area with room to run and play will be enjoyed by your Eskie, but remember he is very agile and athletic so keep your fences high and secure.

Training them to do tricks, which they enjoy, is another good way to provide physical and mental stimulation.

Without both of these, the Eskie can become destructive and noisy.

Take care to time your dog walks with an eye to the temperature in consideration of his warm coat.

The Eskie can adapt to an apartment or house, but no doubt a house with yard would be his preferred choice.

If he is unavoidably housebound, daily outdoor exercise becomes a high priority.  Another solution might be the occasional use of a dog treadmill.

Like most Nordic dog breeds, they are best suited to cooler climates.

In warmer climates, the coat should not be cut as it enables him to regulate his temperature by providing insulation against the heat.

This breed does best with older more controlled children. Their high energy level may be too much even for very active children and over-the-top for toddlers.

As always, no matter what the breed of dog, caution and supervision is recommended whenever children are interacting with pets.

The Eskie With Seniors?

They have also proven themselves to be extremely good in therapy situations.