Airedale Dogs
King Of Terriers And King of Many Hearts!

Airedale dogs are like fine wines - they age well! And, much like a good wine, once you have enjoyed them, it's hard to think about any other ...breed.

Smitten might be an understatement - some familes find them so much fun that one is not enough. Three or four running around is quite an agreeable number to their admirers! 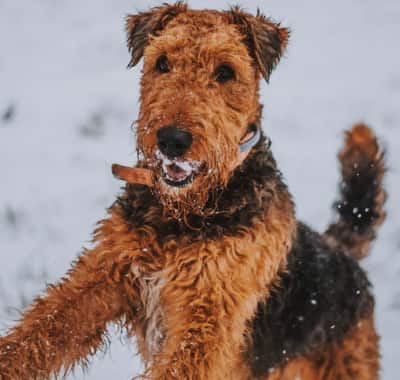 Perhaps it's because the 'Dale as he is affectionately called, is one of the most loyal and loving of all dog companions - I can say this from personal experience and many will agree.

But, they also have many other desirable characteristics. As watchdogs they are fearless, though not aggressive, always alert to any unusual activity and rest assured they will make sure you know about it too!

The Airedale is a breed that has been a beloved pet among celebrities, including former president Warren Harding, John Steinbeck and actor John Wayne.  Mr. Harding's dog, Laddie Boy, was given birthday parties with his dog friends and is commemorated by a statue at the Smithsonian Institution.

He also gained the distinction of receiving the most press coverage of any White House dog, with stories about him running in the news almost daily.

One endearing feature of the breed is that they remain very much like a puppy throughout their lifetime. Full of fun and mischief.

As for getting along with other dogs, just see how gentle the Airedale is with a Norwich Terrier puppy in this video and judge for yourself:

Airedale dogs are the largest of the terrier dog breeds and are often referred to as the king of terriers.

Originating in the valley of Aire in Yorkshire, England, they were cross-bred with the Otterhound and were once known as Waterside Terriers and/or Bingley Terriers.

Sport-huntsmen used them in pursuit of Otters. However, they are equally adept and astoundingly quick, as rat catchers.

Yet, even more versatile, Airedales also excel in setting, retrieving and flushing, and have hunted with great agility the Fox, Badger, Weasel, Foumart, and water rat. In other countries, they have assisted in big game hunting. 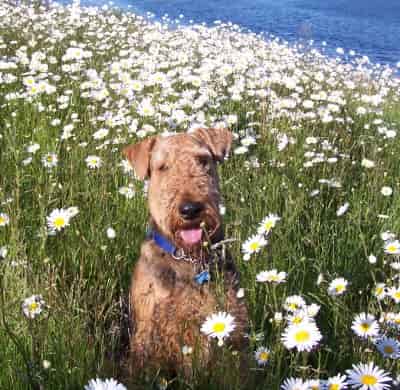 During times of war, the Airedale dogs were used to carry messages, and as camp guard dogs. They carried out their duties very well, never abandoning the task even if injured. Police work has been another area of notable achievement.

The development of Airedales began about 200 years ago, but they were not seen in the United States until around 1881.

As members of the family, 'Dales fit in really well because they are very adaptable and extremely resilient - no wimps here.

You'll find them intelligent, lively, eager to please and given to playful, clownish behavior as well. They love being part of the family and thrive on attention so don't get this dog breed if you want them to spend their lives in the back yard.

Oh, they will adapt to an outdoor situation, but like most terrier breeds, if human interaction is limited, they will find outlets for their boredom that you won't find amusing!

Terriers have inherited strong digging traits so don't be surprised if you find them re-landscaping your back yard for a bit of stimulation when they are bored or not being given enough companionship.

When training Airedales the best approach is to keep the sessions short with the main focus being on almost game-like creativity and variety or your Dale will lose interest and start looking for something more exciting to do.

Airedale dogs are very intelligent thinkers and respond enthusiastically if you give them positive feedback and let them know when they are pleasing you. Harshness will not get the job done, but plenty of patience and affection will.

Although the Airedale is the largest dog in the Terrier group of dogs, compared to dog breeds in general, they would be considered to be in the medium-large range.

You may have heard references to a larger sized Airedale known as the Oorang. This is not an AKC recognized line, but a strain associated with the Oorang Kennel Company of the 1920's.

Walter Lingo, the owner of the kennels was dedicated to developing a strong all-pupose working farm dog and to this end, he acquired many Airedales from far and wide. His breeding program was considered quite unconventional and created a fair amount of controversy at the time.

Although serious fanciers of the Airedale have stuck with the AKC standard intended by its original developers, some kennels still offer the larger Oorang to this day.

So here's what to look for in a traditional Airedale Terrier:

Height: 22-24 inches
Weight: 44-70 lbs.
Color variations: Tan with either a black saddle or one that is referred to as grizzled - a mix of black, grey and white

Airedale dogs have a hard, dense and wiry outer coat, with a second soft undercoat. Daily brushing is needed to prevent mats and tangles from forming which tend to accumulate around the muzzle and armpits.

The coat is waterproof and sheds little, meaning that the dead hair has a tendency to build up in the coat and needs to be regularly removed. Periodically, Airedale terriers will "blow" their coat all at once in a heavy shedding.

If you acquire an Airedale you are planning to show, the coat must be hand stripped which is a method of pulling out the loose/dead hair. It is done with a serrated edged knife and is quite time consuming. A professional groomer can do this, or you can learn the technique yourself if you have the time plus a patient dog!

There are two great tools for home grooming double-coated dogs that, used together, make short work of removing the accumulation of dead hair in the undercoat.

The first one is Mars Stainless Steel 20-Blade Coat King Pet Stripper which emulates professional hand stripping, takes less time and does a great job with thick undercoats. The other tool, the FURminator is amazing for keeping shedding under control.

For everyday touch-up this brush is one I keep for my 'Dale: Hertzko Self Cleaning Slicker Brush along with a good comb such as this one.

Airedale dogs, while enjoying a high amount of activity, are usually quiet and low key snugglers inside the home.

They have a tendency to play in bursts of high energy, then after wearing themselves out, have a good long snooze!

Plenty of play plus long walks on a daily basis are necessary for a fully grown Dale and will result in a very contented dog.

The amount of space isn't so important as the need to get significant exercise. An apartment will do, but this breed also enjoys romping around outside, so a yard or play area is a real plus.  He's also very curious (nosy) to see what's going on around him!

The one caveat is that outside space must be securely fenced because Dales are both fearless and protective and have a strong prey drive!

Secure fencing also protects pets from outside threats such as coyotes, skunks and other dogs.

Airedale dogs get along well with children and are great pets for them. They are patient and gentle and love a game - several in fact!

However, it bears mentioning that Airedale Terriers are very strong dogs and really get involved in  the excitement of play which could be overwhelming for toddlers.  In this case, raising them from a puppy with very young ones would be best.

Whatever the case, it is always in the best interest of children that they be supervised when playing with a dog - no matter what the breed's reputation.

If sufficient exercise can be provided and the Airedale grooming needs met, this breed makes a very loving and protective companion for senior or less active families.

Sufficient exercise cannot be overlooked so it needs to be worked out before acquiring one of these delightful dogs.

Airedale Terriers Manual
This breed, originating in the British Isles, is very popular among dog fanciers and has been honored in dog shows. The Airedale makes a devoted family member. The book covers information on training, exercise, grooming, feeding, and much more.